Tobey Maguire, Andrew Garfield and Tom Holland really did re-create the Spider-Man meme everyone was hoping they would in “No Way Home” — and Sony saved it for just the right moment. On Wednesday, the studio used it to announce the film’s digital and Blu-ray release dates.

“Of course, we got THE meme,” Sony wrote in the tweet alongside the photo. You can check it out below.

“Spider-Man: No Way Home” will be available on digital late next month, on March 22. Those looking to get a physical copy will have to wait a bit longer, as the Blu-ray releases on April 12. 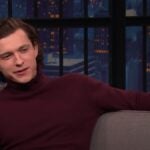 For those who don’t know their memes, this particular Spidey one comes from an image from the 1960s Spider-Man cartoon episode “Double Identity,” in which two Spider-Men are pointing at each other. Of course, one is a villain who is impersonating the hero.

Over the years, fans have edited it to add in more Spider-Men, and largely hoped that the moment would be re-created in “No Way Home.” And in fairness, it somewhat was, in the lab as the three Peter Parkers attempt to work out cures for their villains. It was just subtle.

As for the “No Way Home” Blu-ray bonus features, which include a gag reel and behind-the-scenes featurettes, we’ve got a complete list below.