Now that “Spider-Man: No Way Home” has been out for awhile, Tom Holland is free to discuss spoilers for the film without repercussions. So, on Monday night’s episode of “Late Night with Seth Meyers,” he gave Meyers a bombshell: one of the Spider-Men in “No Way Home” had a fake butt in his suit.

Stopping by “Late Night” to discuss his new film “Uncharted,” which is in theaters now, Holland admitted that he does still get a bit nervous talking about the fact that (spoilers!) Andrew Garfield and Tobey Maguire are in “Spider-Man: No Way Home.” But he was more than willing to reveal this secret.

“I’ll give you a spoiler, and I’m not going to tell you who, but one of us has a fake ass in their suit,” Holland said. “You can figure out that for yourselves.”

You can watch the moment in the video above.

Also Read:
‘Spider-Man: No Way Home’ Had Its Most Emotional Scene Rewritten ‘At Least 10 Times’

Holland added that he distinctly remembered being impressed by said butt, before processing that it wasn’t real. “I remember being on set like, ‘Wow! Oh, hang on a minute, nah, that’s not real,'” he added with a laugh.

That said, this isn’t the first time a Marvel character has gotten a fake rear end on screen. Paul Bettany also wore one while playing Vision in “WandaVision.”

The actor revealed his secret in “Marvel Studios Assembled: The Making of WandaVision.” As Elizabeth Olsen noted that her costume for the 1950s era episode forced her to have better posture and made her want to walk funny, Bettany readily agreed. 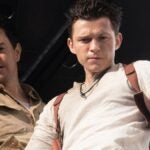 “I have exactly the same thing but with my fake butt,” Bettany said. “It makes me stand properly and wanna do this, too.” The actor then mimicked Olsen and did a little waddle and shake.

So place your bets on who’s got the fake butt in “Spider-Man: No Way Home”: Tom Holland, Andrew Garfield or Tobey Maguire.