“Spider-Man” star Tom Holland doesn’t just play a hero in movies, according to the father of 6-year-old Bridger Walker, he’s one in real life too.

After the Spider-Man franchise star learned that Walker saved his little sister from a dog attack in 2020, Holland was so moved that he not only video-called the grade-schooler, but he also invited him to the set. Now, with the movie out, Walker’s dad has revealed that set visit took place, and his family couldn’t be more grateful for the experience.

“Remember when @tomholland2013 promised Bridger he could come to the filming of Spider-Man? He delivered!” Robert Walker wrote in an Instagram post over the weekend.

According to the elder Walker, he was “a little apprehensive” the movie magic of the film might be “lost for the kids” with their set visit. But, that was not the case.

“The opposite was true! Tom, Zendaya, Harry, @lifeisaloha, @tonyrevolori, and the entire cast/crew made our kids feel like stars,” he gushed. “They don’t just act the part of friendly neighborhood heroes – that’s what they truly are.”

“The look on the kids’ faces was priceless when we rounded the blue-screen to see Tom, in full costume, high above the set on a light post,” the dad continued. “It was emotional to see him waive at the kids like he was the one that was supposed to be excited – not the other way around.”

Walker said both Holland and Zendaya, who plays Mary Jane, came over to meet the Walker kids, leaving memorable impressions. 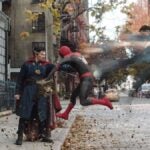 “Zendaya immediately approached my teenage daughter and told her how much she loved her nails. I don’t know if she will ever know how much that simple act means to me – to see my sweet daughter light up with self-confidence and joy,” he wrote.

The elder Walker went on to call the “Spider-Man: No Way Home” cast and crew “good, kind and passionate people,” and he praised them for being “willing to stop a very busy day of shooting to make my little boy smile, and give him a chance to ‘web-swing’ with his hero.”

Check out the slideshow below.

Last year, Bridger shielded his then 4-year-old little sister from a dog attack. A 1-year-old German Shepard dog lunged at the pair, and Bridger got in front of his sister to protect her. His parents said he was bit in the face by the dog, and he had surgery due to the injury. He later went on to undergo a scar treatment procedure.