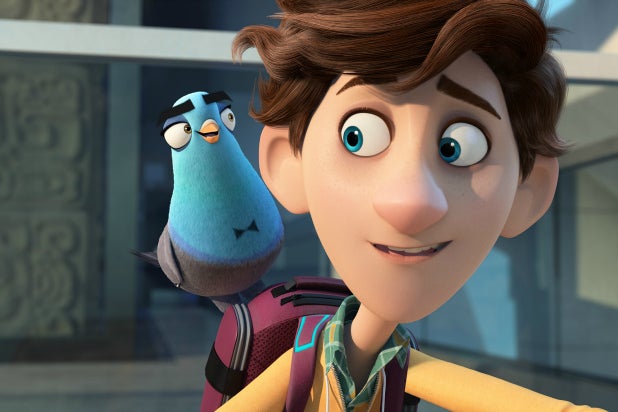 Far from an animated Bond movie, Blue Sky’s “Spies in Disguise” subverts 007’s image of a cerebral, macho loner willing to use lethal force, replacing it with a much-appreciated anti-violence message grounded on geeky heroism. That’s not to say, however, that the conveyance of its pacifist theme results in a satisfying outcome.

With a heavy serving of teamwork mentality and a nearly unrecognizable transmutation of Lucas Martell’s 2009 short film “Pigeon: Impossible,” co-directors Nick Bruno and Troy Quane (both making their feature directorial debuts after extensive stints in the animation departments at different studios) have made an action comedy about the bro-bond between two archetypal opposites.

Suave agent Lance Sterling (voiced by Will Smith), the embodiment of alpha-male cockiness, gets framed for villainous acts he appears to have committed while on a mission to defeat stock antagonist Killian (given Ben Mendelsohn’s menacing voice), a criminal with a robotic hand and the technology to morph his facial features at his convenience.

Watch Video: Will Smith Transforms Into a Pigeon in Animated 'Spies in Disguise' First Trailer

On the run from determined detective Marcy (Rashida Jones), Sterling begrudgingly partners with book-smart scientist Walter (Tom Holland), a sweet guy whose self-loathing is triggered when called “weird” for the unconventional gadgets he devises, his quirky temperament, and the pack of pigeons he keeps as company, which make for cheap comic relief à la Hei Hei in “Moana.”

Essentially harmless toys magnified not as weapons but distractions, Walter’s whimsical inventions don’t injure the enemy but just immobilize them. His signature tricks include a glitter bomb that creates adorable kitten holograms and an inflatable bubble inspired by his late mother’s warm embraces. Those prototypes, along with some of the background and a few sequences featuring bodies of water, are the extent of the film’s visual innovation.

As if allergic to pursuing any sort of distinguishable style, the characters exude a refurbished quality. What drives the design here are repackaged versions of other figures we’ve seen in countless, second-rate CG features over the years. Walter’s bird friend may as well be copied from “Valiant” or a winged mutation of the hedgehogs in “Ferdinand,” while the goofy young man himself bears an uncanny resemblance to the title goofball in “Arthur Christmas” or Jonathan from “Hotel Transylvania.”

Watch Video: 'Bad Boys for Life' Trailer: Will Smith and Martin Lawrence Act Their Ages Alongside Team of Young Cops

Neither Smith nor Holland stretch much to voice these men, given that they’re basically performing the style of attitude we expect from both actors. The exception comes when Walter turns Sterling into a bow-tie-wearing female bird, pushing Smith to amp up the ridiculousness in his interpretation. Getting the character literally out of his own skin and into a vulnerable position emphasizes the value of cooperation and challenges Sterling’s “I fly solo” motto.

Commendably, screenwriters Brad Copeland (“Ferdinand”) and Lloyd Taylor dispute traditional manliness and bravery with a friendship that one hopes will communicate to children, young boys especially, that someone who refuses to respond to aggression with aggression, and who cares more about human life (even the bad guy’s) than about dominance, can still stand tall as a hero. Intelligence as a superpower rules over brute force.

There are scenes where Walter hugs Sterling, endearingly showing unabashed affection without the plot rushing to find him a love interest to assert his straightness. Intimate platonic love expressed so deeply between two adult male comrades is a rare sight in media, so its existence can only qualify as a positive, even if it comes from a movie written and directed by the prevailing voice in animation — white men.

Watch Video: Tom Holland Was Drunk When Bob Iger Called Him to Bring 'Spider-Man' Back to the MCU

In other places, Copeland and Taylor go for the low-hanging fruit, making Walter an orphan and giving the lazily named Killian a simplistic motivation. Against its best interest, “Spies in Disguise” is bent on performing contrived coolness by dishing out trite phrases, shamelessly referencing pop culture (“50 Shades of Yay!”) or sneering at dietary restrictions some view as hipster fads, such as gluten-free eating.

The writers’ desperation for zeitgeist validation reaches peak awkwardness when Sterling dismisses Walter’s antics by walking away from him and uttering “millennials” with a snide tone. One expects the young man to retaliate with an “OK, boomer” — fortunately, they didn’t bother to edit that in.

As unsatisfying as “Spies in Disguise” is because of its disregard for original design and the insufferable nods to disposable trends, its role as counterprogramming to toxic masculinity — turning ruthless spies into sensible beings with warmth as a moral compass — makes it ephemerally laudable. It’s destined to be forgotten, but if we are lucky, its “more hugs, less guns” concept may impact developing minds while it’s out there filling the void left now that most children have seen “Frozen 2.”