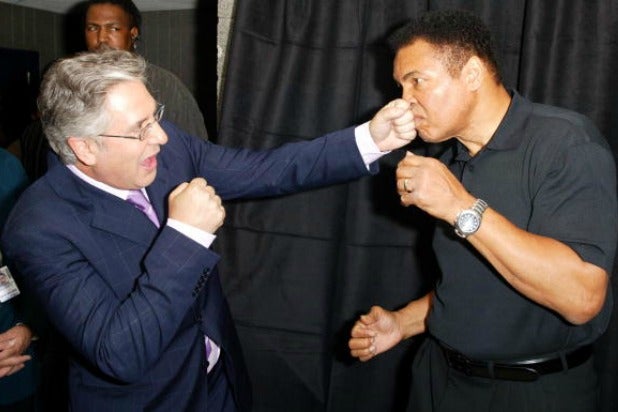 Albie Hecht, the Spike TV founder and former president of Nickelodeon Entertainment, has been named executive vice president and general manager of HLN.

Hecht, who is now the CEO of Worldwide Biggies, a digital entertainment studio, will begin the job Sept. 30. He will oversee all aspects of HLN’s programming, management, and day-to-day operations, as well as HLNtv.com. He will be based in New York and report to CNN Worldwide president Jeff Zucker. (He is pictured play-fighting with Muhammad Ali.)

“Albie is one of the most creative executives in our industry. His diverse experiences at Viacom gave him a keen understanding of cable television, where he created some of media’s most well known brands and franchises. All of that, coupled with his lifelong passion for news and information, makes him the perfect fit for HLN,” said Zucker. “I wanted someone who could build off the strength that currently exists at HLN, which is enjoying one of its highest rated years ever, and evolve the network and its fast-growing digital properties even more.”

“Three key factors made the decision to join HLN easy: the opportunity to further evolve a noted brand, reinvent news in a digital age and work for Jeff, an industry giant,” said Hecht.  “Creating engaging and buzzed about content across multiple platforms is in my DNA, and I am excited to make magic with the talented team at HLN.”

Hecht led the transition and rebranding of the former Nashville Network to Spike TV. As creator and president of Spike, he signed the “Ultimate Fighting Championship.” As president of Nickelodeon Entertainment, he oversaw the development of “SpongeBob Squarepants,” “Dora the Explorer,” “Blue’s Clues,” the live action show “All That,” “The Rugrats Movie” “Jimmy Neutron: Boy Genius,” which received an Oscar nomination. He also co-created Nickelodeon’s  “Kids Choice Awards.”

He has also worked on documentary and nonfiction projects through his non-profit Shine Global, including the Academy Awardpwinning short documentary “Inocente,” as well as “War/Dance” which was nominated for an Academy Award and won an Emmy for Best Documentary.

This year, he became founding director of the New Media Lab at CUNY’s Macauley Honors College.  On Sept. 25, he will be inducted into the CableFAX 2013 Program Hall of Fame.