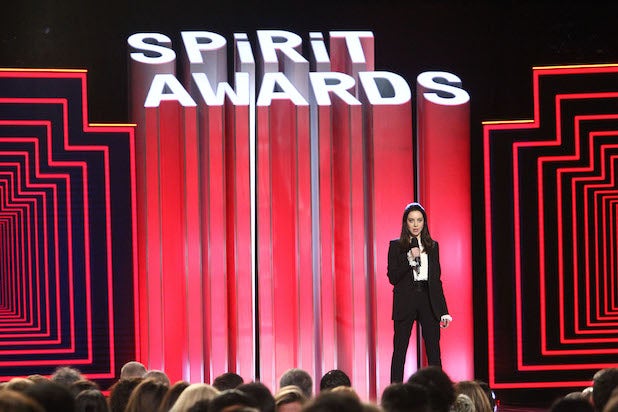 On Saturday afternoon in a tent on Santa Monica beach, the Film Independent Spirit Awards will have another chance to prove they’re not trying to be Oscars Lite.

They’ll have another chance to honor great movies that were bypassed by the Academy — tough, weird, beautiful films like “Uncut Gems,” “A Hidden Life,” “The Last Black Man in San Francisco,” “Honey Boy,” “Her Smell” and “Give Me Liberty.”

Another chance to be a real alternative to Sunday’s big show, not a low-key rehearsal for it.

But will they take that chance? I’m hopeful, but not terribly optimistic.

A little less than one year ago, on the day before the 2019 Film Independent Spirit Awards, I wrote a column about how the slate of nominees “(made) a case for what the Spirit Awards should be: not the baby brother to the bigger, glitzier show across town the next day, but a true alternative.”

In the early years of the awards, after all, Spirit Award voters gave their top prize to “Sex, Lies and Videotape” over the Oscar winner “Driving Miss Daisy,” to “Pulp Fiction” over “Forrest Gump,” to “Leaving Las Vegas” over “Braveheart,” to “Fargo” instead of “The English Patient,” to “Election” over “American Beauty,” to “Memento” over “A Beautiful Mind.”

But when last year’s show ended, my post-show analysis concluded, “the 2019 Spirit Awards ended up feeling sort of like an alternative to the Oscars, but sort of like the closest thing that Spirit voters could conjure up.”

In almost every instance where an Oscar nominee was also on the Spirit Awards ballot — best actress Glenn Close, supporting actor Richard E. Grant, supporting actress Regina King, best international film “Roma,” the writers of “Can You Ever Forgive Me?” — that person won. And the Best Feature category, where none of the nominees were up for the Best Picture Oscar, was claimed by Barry Jenkins’ “If Beale Street Could Talk” — which was, I wrote, “the closest thing they could find to an Oscar movie.”

The winners were all worthy — heck, “Beale Street” was one of my favorite movies of 2019 — but the results still felt as if the Spirit Awards voters took the bold and challenging slate of nominees presented to them by the nominating committees, and unerringly went for the awards movies with the highest profiles.

That was hardly a surprise, two years removed from a four-year streak in which the Spirit Awards’ big winner would go on to win the Best Picture Oscar the next day, and more than half the acting winners would do the same. But it was nonetheless disappointing.

This year’s group of nominees is in many ways even bolder than last year’s, with Renée Zellweger the sole acting nominee who’s also up for an Oscar. But those nominations are chosen by small and often adventurous nominating committees; the final choices are made by almost 7,500 voters, some of whom are film professionals but many simply fans who pay $95 a year for membership privileges, which include voting. They no doubt don’t see as many films as the members of the committees, and the winners are often safer and more predictable than the nominees.

So what’ll it be this year? The Best Feature nominees include one film that is also nominated for Best Picture at the Oscars, Noah Baumbach’s “Marriage Story,” along with Terrence Malick’s “A Hidden Life,” Chinonye Chukwu’s “Clemency,” Lulu Wang’s “The Farewell” and the Safdie brothers’ “Uncut Gems.”

While “The Farewell” may have been seen by more voters than any of the other films, history suggests that the likeliest winner is the Oscar contender, “Marriage Story” — and it’s hard to begrudge it that win, especially since awards season hasn’t really been kind to Baumbach’s film, except for Laura Dern’s string of supporting-actress victories. But my favorite movie of 2019 was “Uncut Gems” and my second favorite was “A Hidden Life,” either of which would feel like a brave choice rather than an attempt to get as close to the Oscars as possible.

In some other categories, it’s almost inevitable that the voters will lean in the direction of the Academy. “Marriage Story” will probably win the screenplay award. Oscar nominee Jarin Blaschke will likely win the cinematography prize for “The Lighthouse” (which will be richly deserved). Zellweger will almost certainly win acting honors for “Judy,” even though she hardly needs one more award on the road to Oscar — and no disrespect to Zellweger, but wouldn’t it be wonderful if Mary Kay Place or Elisabeth Moss or Alfre Woodard could win it instead? “Parasite” will surely win Best International Film, as cool as it might be to give “Portrait of a Lady on Fire” a turn in the spotlight.

And as an apology for their Oscar snubs, Adam Sandler and Jennifer Lopez will probably win acting awards, and good for them.

It’ll no doubt be a lively show and an irreverent one, and one not hamstrung by the sense of event that hangs over the Academy Awards. Aubrey Plaza made for a sharp, biting host last year, and there’s no reason to think she won’t do it again.

And maybe it’ll be more than that. Maybe, for the first time in quite a few years, it’ll be a real tribute to independent spirit, and a real alternative.

One can dream, right?