The Independent Spirit Awards nominations are chosen not by a large group like the Academy mailing in their ballots in secrecy, but by little more than a dozen people sitting around a living room talking about movies.

That’s part of the fun of it – even when the results are arrived at only after two long days of painstaking discussions and a call to 911, as they were this year.

“The process is intense and rigorous, but it’s exhilarating,” said Film Independent’s executive director, Dawn Hudson, after Tuesday morning’s announcement of the Spirit Awards nominees. “It’s people who love film sitting around talking not about boxoffice, or distribution schedules, or anything except the art and craft of moviemaking.” 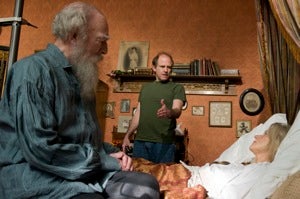 “We started with more than that,” said Hudson, “but people drop out because it’s such an overwhelming commitment to see all the eligible films. Spouses get mad, families get upset, and life stops for the committee members while they watch all the movies.”

Stephanie Allain, chaired the main committee this year, said the members watched “two or three movies a day” for weeks on end, before meeting at her house for a weekend-long discussion to choose the nominees. (Separate, smaller committees make the selections in the Best Foreign Film and Best Documentary categories.)

Allain’s committee moved through the categories one at a time, she said, starting on Saturday morning with the Best Feature and Best First Feature categories. The process was multi-level: everyone suggested favorites, a list was compiled, and then the committee painstakingly discussed every film on the list before voting by secret ballot. Several rounds of balloting were often required to come up with a list of five nominees.

“We went very slowly at first,” she said. “At the end of the first day, I think we’d only gotten through three of the categories.”

Then Sunday got off to a rocky start: Karaszewski showed up and asked if she had a fire extinguisher, because his vintage Jaguar was on fire. The committee members tried to douse the flames with buckets of water before giving up; they called 911, and took cover in case the car exploded.

It didn’t, and the committee decided on the remaining eight categories that day.

Only one thing worried the members afterwards, said David Ansen: “We were afraid that everybody would look at the list and say, ‘Where’s ‘The Hurt Locker’?”

That film was submitted last year, and won acting nominations for Jeremy Renner and Anthony Mackie, making it ineligible for this year’s Spirit Awards. (If it hadn’t been nominated for anything, it could have been resubmitted.)

So is Film Independent satisfied that the film got a proper hearing from last year’s committee, or would they like a do-over on this one?

“Everyone on the committee loves that movie, and everyone wishes it was eligible all over again,” Hudson said with a laugh. “But I think we helped start it on its way, don’t you?”