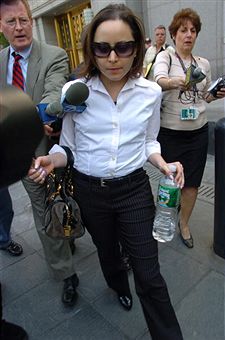 If there’s an unlikely breakout star in director Alex Gibney’s fascinating documentary about the rise and fall of disgraced New York governor Eliot Spitzer, it’s Cecil Suwal (left), who was the 22-year old CEO of the Emperor’s Club, the high-priced escort service the politician patronized.

In the still-untitled, unfinished documentary, which had its first showing ever, as a work in progress, Saturday night at the Tribeca Film Festival in New York City, the doe-eyed and dark-haired Suwal comes across like a giggly, breathless version of Alicia Silverstone in "Clueless."

She pops up frequently throughout the film and, nearly every time, drew huge laughs from the audience for her air-headed approach both to running a major escort service and to playing a role in bringing down the most powerful elected official in New York state in early 2008. Suwal explains that when she was setting pricing for the Emperor Club’s prostitutes, "You would just add an ‘O’  to the hourly rate to get the day rate for a girl," i.e. an escort who cost $1,000 per hour would bill $10,000 for a full day.

Gibney’s comprehensive portrait of Spitzer was done in collaboration with investigative journalist and author Peter Elkind, whose book on the governor’s downfall, "Rough Justice: The Rise and Fall of Elliot Spitzer," has just been published. Both men received the cooperation of Spitzer, who is interviewed at length in the film.

The ex-governor, dubbed "The Luv Guv" in the New York City tabloid newspapers after revelations that he had 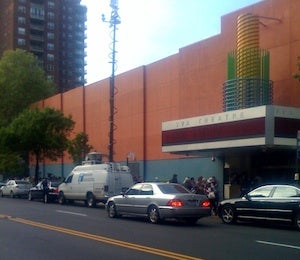 hired and had sex with a then 19-year old Ashley Alexandra Dupré and other prostitutes working for the Emperor’s Club, compares himself in Gibney’s film to Icarus, from Greek mythology. "Those whom the gods would destroy, they first make all powerful," Spitzer says.

(At right, a local news van parked outside the theater where the documentary played; photo by Leah Rozen.)

In the film, Spitzer appears chastened and rueful about his behavior, saying, "I brought myself down. I did what I did, and shame on me."  But he remains proud of the crusade he led against the  rich and powerful on Wall Street when, prior to being elected governor, he was the state’s attorney general. His battles with the big wigs of finance (including former-AIG chief Hank Greenberg) earned him the nickname the Sheriff of Wall Street."

"I think Spitzer is deeply frustrated that he’s on the sidelines now at this time of economic meltdown," Gibney said during a Q&A following the screening. The documentarian, whose "Taxi to the Dark Side" (2007) won an Oscar, has two other works in the current Tribeca festival, "My Trip to Al-Qaeda" and a segment in "Freakonomics."

He said he interviewed Spitzer four times for the film and agreed to check with the former governor on the factual accuracy of any information discovered, but Gibney stressed that Spitzer had no editorial control over the movie nor a financial interest. Spitzer has not seen the movie yet but Gibney said he expects him to view it soon.

In a move sure to cause controversy, Gibney hired an attractive red-haired actress, Wrenn Schmidt, to portray in interview segments "Angelina," a pseudonymous prostitute whom Spitzer hired repeatedly. Gibeny says in the film that he tracked down the real Angelina and interviewed her – she had not talked before – but that she would not appear on camera, allow her real voice to be used or her real name.

He said in the Q&A  that he had the actress speak Angelina’s exact words and directed her to reflect the real the escort’s manner and attitude, but did not have her mimic the the escort’s actual voice. 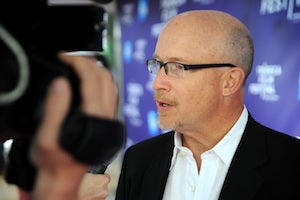 In the film, Angilina says that she had sessions with Spitzer in New York, Palm Beach, Los Angeles and other cities. She says that Spitzer was a smart guy, removed his socks before having sex (knocking down one of the more salacious details reported when the story first broke), and that the kinkiest it got was her wearing sexy  lingerie. In the closing credits, we are told that Angelina is now a commodities trader.

Gibney (left) did not interview Dupré for the film, though there is plenty of existing footage of her included. He said he tried to interview her, but "lengthy negotiations" broke down when Dupré, now a romantic advice columnist for the New York Post and an aspiring singer, demanded editorial control.  He said he had hoped to interview Silda Spitzer, the governor’s wife (who famously stood, looking shell-shocked and red-eyed, alongside Spitzer during his I-did-it-and-I’m-sorry press conference), but she declined.

The screening – the only showing of the film at the festival – drew a diverse audience that included director Nora Ephron and her author husband Nicholas Pileggi, New York City police commissioner Raymond Kelly and actress Tina Louise (of "Gilligan’s Island" fame).

In remarks preceding the film, Gibney said that friends had suggested titles for the movie such as "Ain’t Misbehavin’," "I Shot the Sheriff" and "Shake Your Moneymakers." He said, however, that he was really coming to like "Untitled Eliot Spitzer Documentary," the title the film was listed under for the festival, and was half tempted to keep it as the name once he completes the film.