Continued from: 10 Things You'll Need to Know About 'Iron Man 2'

DO NOT CONTINUE READING UNLESS YOU WANT TO BE SPOILED.

(ALSO READ: Why Iron Man is the First 21st Century Superhero | Will Anyone Make 'Iron Man 3'?)

1. All Those New Characters

Scarlett Johansson: She's Tony Stark's smokin' hot new executive assistant. But wait, she's a double-agent! But that's OK, because she's actually working for S.H.I.E.L.D., so she's with the good guys. But she's got Tony Stark under her control … sort of. Then she starts the martial-arts and it all kind of doesn't matter.

Don Cheadle: James "Rhodey" Rhodes, Tony Stark's best friend and a top-ranking military man, is also working behind Stark's back for Uncle Sam. Which turns out to be good for Stark in the end. Then Cheadle puts on the War Machine suit and it all kind of doesn't matter.

Samuel L. Jackson: We saw him in the post-credits Easter egg from "Iron Man" as Nick Fury, director of S.H.I.E.L.D., approaching Stark to tell him that he's not the only superhero in the world. For the sequel, he offers some wooden dialogue, a la Mace Windu in the "Star Wars" prequels, and none of it seems to make sense or matter. It will later; Favreau doesn't leave pistols on the mantle.

John Slattery: Howard Stark, Tony's less-than-attentive and long-deceased father, reappears in a canister of old films that S.H.I.E.L.D. agents leave for Tony to watch. But wait — there's an Easter egg in the film within the film! (see next) …

Howard Stark's film reel: It looks like outtakes from a promotional shoot, but the '60s-era Stark (dressed sharp as a "Mad Men" man should be) is actually about to deliver an end-of-reel secret message to his son … which turns out to be a diagram for a new element that's critical to Stark's life and livelihood. It also resolves Stark's daddy issues a little too neatly. This also doesn't matter.

Captain America's shield: A busted-up metal dome is just lying around Tony Stark's shop that clearly resembles Steve Rogers' signature accessory. Stark uses it for a shim to hold up part of his particle collider. Ha ha. There is no conceivable way this can be reconciled, unless Marvel has a really clever trick up its sleeve for Cap.

Thor's Hammer: If you hang past the credits you'll see S.H.I.E.L.D. Agent Coulson (Clark Gregg) standing near a smoking crater in a New Mexico desert. Cut to a leather-hilted sledge in the sand — Thor's Hammer, the weapon of choice for Marvel's next attempt at success with a second-tier character. "We found him," Coulson says into a cell phone … cue the house lights. The scene is apropos of nothing in the movie we just saw, but it certainly nods to at least three Marvel films in which Gregg (and presumably, several of the Marvel tie-in characters) will appear soon — "Thor" (2011)," "The Avengers" (2011) and presumably "Nick Fury" (2012). Back to "10 Things You'll Need to Know About 'Iron Man 2'".

(Next Page). 3. Sam Rockwell as a “Glee” character: All Rockwell's character Justin Hammer needs is a red track suit, a megaphone and a shaggy blonde wig, and he's Sue Sylvester, the psychotic gym teacher and cheerleading squad coach from the Fox hit "Glee." Rockwell employs all the mannerisms and vocal tics of Jane Lynch, from the cartoonish ruthlessness to the nonstop bon-mots meant only to tear down whoever's around. To be fair to Rockwell, "Glee" debuted just as "Iron Man 2" was wrapping its shoot — this is a coincidence (and admittedly, a bit of a stretch). Still, the characters' resemblance is at least worthy of a YouTube mashup. Anyone? 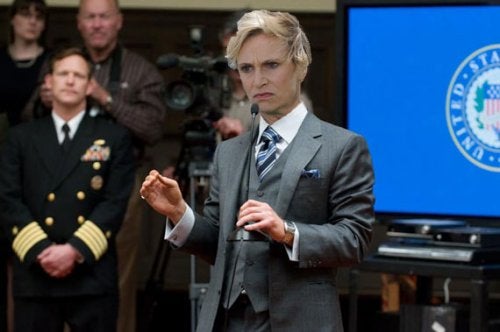 5. There’s a Love Story in Here Somewhere, I Just Know It: OK, you saw this one coming: Tony Stark and Pepper Potts (Gwyneth Paltrow) hook up. Tons of problems with this connection, not the least of which is: How could it possibly last? Potts quits her new job as Stark Industries CEO in a fit of stress because the company namesake is constantly putting himself in fatal danger … then she instantly decides that they're an item? Because that will somehow be less stressful?

(ALSO READ: Why Iron Man is the First 21st Century Superhero | Will Anyone Make 'Iron Man 3'?)