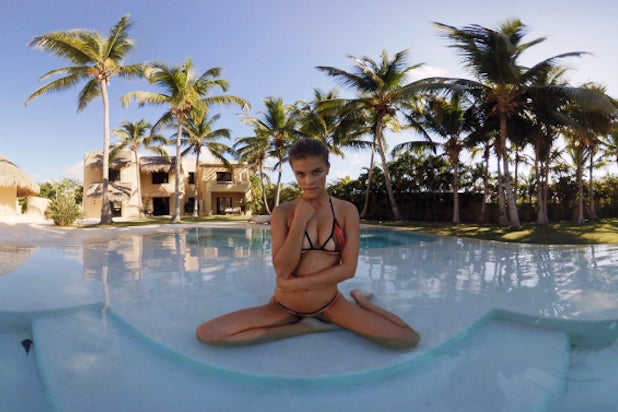 If you’ve always dreamed of hanging out with scantily clad supermodels while wearing clunky glasses, the new Sports Illustrated Swimsuit Issue is here to bring your fantasies to life. Or at least to virtual reality.

Alongside the photos and videos of buxom models you’d expect, the magazine is introducing virtual-reality content in a new Sports Illustrated Swimsuit App. It’s one of the first tests of whether people will open their wallets for the emerging format.

The VR content, which features former cover models Nina Agdal, Irina Shayk and Hannah Davis, was shot in the Dominican Republic during photo and video shoots. It offers behind-the-scenes content and what the magazine calls “intimate access” with the models.

“This year’s virtual reality shoot answers the questions we get every day: ‘What is it like to be on a Sports Illustrated photo shoot?” said creative director Christopher Hercik in a statement.

Virtual reality, an entertainment and communication format that makes viewers feel like they’re in the middle of the action, is poised to hit average consumers this year, with a slew of companies bringing headsets to market. Most VR content is free, since creators want to build an audience. But paid experiences for mainstream content are rare.

So what do avid fans of swimwear receive for their money? Downloading the free Sports Illustrated swimsuit app gives them five VR clips without charge, but the other six must be unlocked with a $1.99 payment. The full app, which includes other videos and elements, is $4.99 for people who don’t subscribe to the magazine or buy the issue on the newsstand.

Foldable cardboard headsets compatible with Google’s Cardboard will be offered in about 500,000 special newsstand versions of the swimsuit issue. It will cost $2 more than the normal $8 issue. Sports Illustrated subscribers will be able to order a headset for $2.99.