“Spotlight” had its fair share of burdens to overcome: It deals with the Catholic church’s sex abuse scandal, which has already been the subject of several powerful documentaries (including “Deliver Us from Evil” and “Mea Maxima Culpa”), and it’s director Tom McCarthy’s first film since the catastrophic Adam Sandler vehicle “The Cobbler.”

Neither winds up weighing down this extraordinary drama: While the script (written by McCarthy and Josh Singer, “The Fifth Estate”) certainly doesn’t shy away from the horrors that priests visited upon their young victims — and the institutional conspiracies that kept these predators from ever facing criminal justice — the film focuses on the dogged sleuthing by reporters and editors at the Boston Globe that broke the story. The result is a career highlight for the director of such Sundance favorites as “Win Win,” “The Station Agent” and “The Visitor.”

“Spotlight” is that rare journalistic procedural that deserves to be mentioned in the same breath as “All the President’s Men,” and while the movie never glamorizes or makes saints of its hard-working newsgatherers, it does stand as a reminder of the power and importance of a free press, particularly in ferreting out local corruption and malfeasance. (Not for nothing is Rachel Maddow always beseeching her viewers to support their local newspapers.)

When we meet Walter “Robby” Robinson (Michael Keaton), the editor of the Globe’s investigative Spotlight department, he and his team — Sacha Pfeiffer (Rachel McAdams), Michael Rezendes (Mark Ruffalo) and Matty Carroll (Brian d’Arcy James, “Smash”) — are concerned about the arrival of their new boss Marty Baron (Liev Schreiber). Baron being Jewish and an out-of-towner makes him suspect in the eyes of the Boston establishment, but the Globe staffers are more worried about the fact that he cut staff by 15 percent at his previous paper due to falling revenues. (The film is set in 2001 and set against a growing Internet laying waste to traditional media.)

A column about a local priest accused of molestation prompts Baron to ask if there isn’t more of a story here, one that the Globe has perhaps been underreporting because of the church’s ubiquity in the city (including its power structures). As the Spotlight team begins digging, they find more and more victims willing to speak out against more and more clergy, but Baron eventually realizes that the story is bigger that that: it’s about Cardinal Law (Len Cariou) and a culture of silence wherein parents were pressured to settle while guilty priests were shipped off to new parishes (and new victims) after a few months of therapy. (This is a rare movie in which a character can utter, “It’s about the system” without prompting audience giggles.) 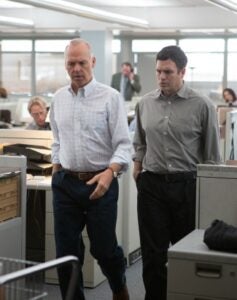 If “Spotlight” were merely about putting the pieces together to break a big news story, it would be interesting enough, but the film gracefully, without overplaying its hand, delves into many provocative ideas and subplots, from the faith in the Almighty versus faith in the institutions that claim to work on his behalf (all of the Spotlight team are lapsed Catholics themselves) to the idea that the Globe itself might have enabled this scandal by not reporting on it for years, even when damning information about the abuse was literally landing on their desks.

McCarthy has assembled a crack squad of character actors (some of whom happen to be movie stars), and almost all these characters feel vital and rich even though so many of them are in play over the course of a two-hour movie. That’s a problem fellow Venice entry “Everest” never quite overcomes, and “Spotlight” tops that film in another regard: both movies are true stories, but this one passes what we might call the “Apollo 13” Test, generating suspense and tension even when we know the eventual outcome.

Seeing Keaton strolling past a printing press brings back memories of his turn in “The Paper,” and here he once again gets to play a man whose joviality masks a tenacious need to get the information he’s chasing. Familiar faces like Billy Crudup, John Slattery, Stanley Tucci, Jamey Sheridan and Paul Guilfoyle — along with up-and-comers like Michael Cyril Creighton and Jimmy LeBlanc, both playing adult victims — make indelible impressions in just a few scenes each.

McAdams and Broadway star d’Arcy James disappear into their roles, and that’s a good thing; the weakest link in the bunch turns out to be the top-billed Ruffalo. There’s a difference between an actor transforming himself for a role and simply doing a voice, and the latter is what we get from Ruffalo, along with an unflattering Caesar haircut. (He gets to blow his stack late in the film, and it’s a very For-Your-Consideration moment.)

Cinematographer Masanobu Takayanagi captures the many corners of the Globe’s offices, from fluorescent-lit newsrooms to the shadowy basement archives, and the film impressively handles 9/11 in a non-sensational way, portraying what that day must have been like from the perspective of those who had to cover the story. (The ethics of running an exposé on the Catholic Church at a time of national grief becomes a valid topic of discussion.)

Ultimately, “Spotlight” never treats its subject matter as mere fodder for its journalists to cover; the horror of what’s being uncovered remains front and center, and as the closing credits roll, it’s the pain and suffering of the victims that stay with you as much as the bravery of the Globe staff.