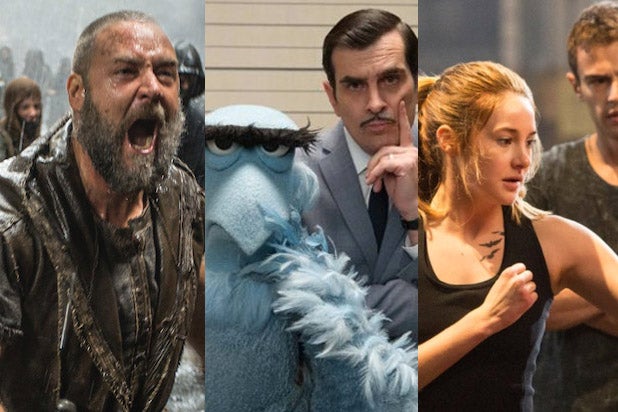 Hollywood used to dump some of its worst movies early each year. No more.

There are plenty of promising films debuting over the next four months: “Transcendence” and “Divergent” both could launch franchises. Sequels “Captain America: The Winter Soldier” and “The Raid: Berendal” should tide fanboys over until “X-Men: Days of Future Past” and “The Guardians of the Galaxy” kick off the summer season.

And there are several auteur-driven productions such as Darren Aronofsky’s “Noah” and Wes Anderson’s “The Grand Budapest Hotel,” which could play a role in next year’s Oscar race.

Here’s a look at 15 films TheWrap can’t wait to see.

RIDE ALONG
Cast: Kevin Hart, Ice Cube
Director: Tim Story
Release Date: Jan. 17
Danger Signs: Really? Another buddy cop comedy?
Why We’re Still Psyched: After last summer’s “Let Me Explain,” Hart is on a roll. He has the air of a comic who is about to break into the stratosphere. Judging by the hilarious trailer, this could be the movie that propels him there.

THAT AWKWARD MOMENT
Cast: Zac Efron, Miles Teller, Michael B. Jordan
Director: Tom Gormican
Release Date: Jan. 31
Danger Signs: The story of two guys who vow to stay single to help their pal through a breakup has all the hallmarks of a film that happened before its cast hit it big.
Why We’re Still Psyched: …But what a trio. Efron elevates any romantic comedy, Teller’s machine-gun delivery seems tailor made for his role as a crass party guy and, after breaking our hearts in “The Wire” and “Fruitvale Station,” Jordan gets a chance to prove he can make us laugh as well as cry.

See video: Kevin Hart Hopes Ice Cube Is Not the Death of Him in ‘Ride Along’ Trailer

THE LEGO MOVIE
Cast: Liam Neeson, Morgan Freeman, Chris Pratt, Will Arnett
Director: Phil Lord, Chris Miller
Release Date: Feb. 7
Danger Signs: The number of good or even watchable films made about toy lines is scant. Product placement may play like gangbusters in corporate boardrooms, but it’s death to drama. Just ask “Battleship.”
Why We’re Still Psyched: By integrating historical figures such as Abraham Lincoln and comic book characters such as Batman, “The Lego Movie” looks like it may have hit the sweet spot of being exciting enough to keep the kids in their seats and witty enough to prevent parents from falling asleep in them.

ROBOCOP
Cast: Joel Kinnaman, Gary Oldman, Samuel L. Jackson
Director: José Padilha
Release Date: Feb. 12
Danger Signs: Paul Verhoeven’s 1987 original was a cult masterpiece that neatly blended satire and science-fiction. Can it really be improved upon?
Why We’re Still Psyched: Edward Snowden’s leaks about the extent of NSA surveillance activities have made debates about civil liberties and public safety relevant again. The story of a half-machine supercop may not seem like the perfect vehicle for engaging in that dialogue, but Padilha has shown an eagerness to take on issues of social justice in his Brazilian films such as “Elite Squad.” There could be more behind the mask than meets the eye.

THE GRAND BUDAPEST HOTEL
Cast: Edward Norton, Ralph Fiennes, Owen Wilson, Tom Wilkinson, Tony Revolori
Director: Wes Anderson
Release Date: March 7
Danger Signs: Anderson is a matchless visual stylist, but he can get so consumed in crafting elaborate cinematic worlds to the point where his films can grow cloying. Will “Budapest Hotel” be another overly precious trifle such as “The Life Aquatic with Steve Zissou” or will it build on the momentum of the Oscar-nominated “Moonrise Kingdom”?
Why We’re Psyched: Fiennes looks like he pulls off grand larceny as the scene-stealing manager of a posh hotel, whose womanizing pursuit of older patrons lands him with a priceless work of art. Plus, at the very least, Anderson’s films are always masterpieces of production design, even if the plot gets bogged down or lost in the set dressing.

ENEMY
Cast: Jake Gyllenhaal, Mélanie Laurent, Isabella Rossellini
Director: Denis Villeneuve
Release Date: March 14
Danger Signs: It’s a twisty tale involving a man seeking out a look-alike he spots in a movie. Can Gyllenhaal and Villeneuve keep the outlandish premise from spinning out of control?
Why We’re Psyched: Director and star last collaborated on “Prisoners,” a moody thriller that gave Gyllenhaal his richest role in years. If they can can keep the streak rolling, we might be able to forgive “Prince of Persia.”

VERONICA MARS
Cast: Kristen Bell,  Enrico Colantoni, Ryan Hansen, and Jason Dohring
Director: Rob Thomas
Release Date: March 14
Danger Signs: It can be hard to get the gang back together after a six-year absence. Fans of the original cult hit may be rejoicing that their social media campaign resulted in a big-screen revival, but as “Arrested Development’s” erratic new Netflix seasons proved, be careful what you wish for.
Why We’re Psyched: There’s never been a sleuth quite like Veronica. Over three quirky, funny and nearly note-perfect seasons, Thomas and Bell reinvented the detective genre. Even if they fall short of recapturing the old magic, it’s good to have them back on the case.

MUPPETS MOST WANTED
Cast: Tina Fey, Tom Hiddelston, Stanley Tucci, Christoph Waltz, Ty Burrell
Director: James Bobin
Release Date: March 21
Danger Signs: Jason Segel and Amy Adams were a big part of what made “The Muppets” such warm, big-hearted fun. They’re not part of the sequel, which could leave a gaping hole.
Why We’re Psyched: Transporting the Muppets to Europe and wrapping them up in a jewel heist seems like the perfect recipe. Heck, adding larceny and Big Ben to the mix worked well with “The Great Muppet Caper.”

DIVERGENT
Cast:  Shailene Woodley, Theo James, Zoë Kravitz
Director: Neil Burger
Release Date: March 21
Danger Signs: Remember “Mortal Instruments”? Didn’t think so. How about “The Host”? Nah. Not all young adult franchises are created equal.
Why We’re Psyched: Woodley is the real deal and Lionsgate/Summit, which is producing this movie, knows how to tap the tween sweet spot thanks to “The Hunger Games” and “Twilight.”

NYMPHOMANIAC
Cast: Shia LaBeouf, Jamie Bell, Charlotte Gainsbourg
Director: Lars Von Trier
Release Date: Part I hits on March 21, 2014 and Part II slides into theaters on April 18, 2014.
Danger Signs: Four hours of cinematic sex requires a lot of endurance — plus with Von Trier behind the camera, it’s likely to be coitus of the squirm-inducing variety.
Why We’re Psyched: When not making ill-considered comments about being a Nazi, Von Trier is one of the preeminent avant-garde directors working today. With “Nymphomaniac,” he’s courting controversy as he hasn’t done since “Dogville.” That’s worth the price of admission.

NOAH
Cast: Russell Crowe, Logan Lerman, Emma Watson, Jennifer Connelly, Anthony Hopkins
Director: Darren Aronofsky
Release Date: March 28
Danger Signs: Aronofsky and Paramount reportedly tussled over the final cut of the film. These kind of battles between studio and director do not often end in masterpieces.
Why We’re Psyched: The “Black Swan” director is working on a massive scale and has grand ambitions for making the familiar biblical tale more human and relatable. That’s a highwire act — the secular community may shrug, the religious groups may cry blasphemy. How often do you get to see a visionary work without a net?

THE RAID 2: BERENDAL
Cast: Iko Uwais, Alex Abbad, Julie Estelle, Tio Pakusadewo
Director:  Gareth Evans
Release Date: March 28
Danger Signs: Part of the fun of “The Raid” was the claustrophobic tension Evans was able to create by setting much of the action in a single tenement. By widening the canvas on his martial arts epic to include the streets of Jakarta and its jails, will he sacrifice that intensity? Bigger is not always better.
Why We’re Psyched: The action choreography and bloody fight scenes of the first film were more thrilling than any of Hollywood’s typical special effects extravaganzas. We’d follow this team to hell and back, which based on the trailers, is just where Evans intends to take audiences.

CAPTAIN AMERICA: THE WINTER SOLDIER
Cast: Chris Evans, Robert Redford, Anthony Mackie
Director: Anthony Russo, Joe Russo
Release Date: April 4
Danger Signs: Part of the fun of the first movie was its World War II backdrop. Are we going to be treated to fish out of water hijinks involving cellphones and ATMs?
Why We’re Psyched: The conspiracy infused plotline sounds like “Three Days of the Condor” with superheroes. No wonder Redford was cast.

TRANSCENDENCE
Cast: Johnny Depp, Rebecca Hall, Morgan Freeman
Director: Wally Pfister
Release Date: April 18
Danger Signs: Depp’s judgment in projects of late has been, to put it charitably, erratic. “The Rum Diaries,” “The Lone Ranger,” “Dark Shadows,” “The Tourist.” The list is long and undistinguished. This guy’s in a slump.
Why We’re Psyched: As a cinematographer on “The Dark Knight” films and “Inception,” Pfister played a key role in helping Christopher Nolan realize his dark thrillers and fantasies. Now it’s his turn to slide behind the director’s chair with the story of a scientist who downloads his mind into a computer. Get ready for a head trip.