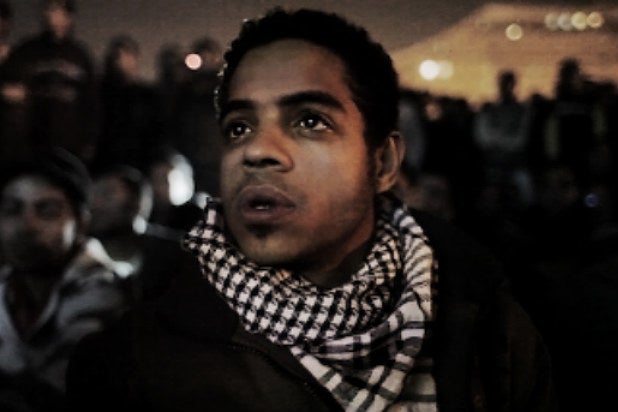 Egyptian-born documentarian Jehane Noujaim (“Control Room”) spent more than a year living the Egyptian revolution on Tahrir Square, in the center of history as it unfolded.

She has made of this experience an intimate, gripping and highly personal tale in “The Square,” which opened last week in New York and opens this weekend in Los Angeles. She spoke to WaxWord about the journey of the film through not one but two Egyptian upheavals.

Sharon Waxman:  You did such a great a job putting faces on the people behind the Egyptian revolution. How did you get so close to them?
Jehane Noujaim: I grew up 10 minutes from Tahrir Square. And if you ask me what Egypt was like, I can tell you that the (Muslim) Brotherhood was banned. People from different classes were not connecting. People didn’t feel like they had control, or a hand in the future of the country. People felt alienated from their own lives, disconnected from any feeling like they could change anything in their country.

That was the Egypt I grew up in. I had friends who didn’t want to have kids because they felt it was corrupt and didn’t have much of a future.

Where were you when the revolution began?
There were rumblings happening, and with the explosion in Tunisia, we all knew something in Egypt was around the corner. We didn’t know what. On January 25, I was invited to Davos. I thought would be interesting to be there because a lot of Egyptian leaders were supposed to be there. They didn’t show up. I was living in Cairo all of November, December 2010 and then January.

Why were you there?

I was there making decisions about my future. I was living in London, trying to figure out next my project. I left Egypt at 17, but I never really left. My family lived in Zamalek (an upscale neighborhood) and I would go back twice a year. I went to boarding school in the States, then to college in the States, and stayed.

I went back to the country with 10 DVDs of “Egypt We’re Watching You” [a movie she made about women activists]. I was arrested about an hour after landing, driving home from the airport. It was military intelligence, but I didn’t know who it was. I was very scared. I lied for about three hours. I said I’m not a filmmaker. I’ve never made films about politics. At a certain point I went out to my car to dump the DVDs, this guy walked in who was cleaning the bathroom, and holds up a shard of DVD, and I broke and said, I’m going to be completely honest.  I was released.

I went directly to the square after that and was surrounded by men and women of different classes, excited about their future — religious, secular — having conversations about what they envisioned. I wanted to be able to share that. I’d come from New York where we marched by the thousands against the Iraq war and it didn’t matter. So I was a little cynical.

But there were people refusing to leave, refusing to compromise on their basic rights. It was very inspiring, and I wanted to share that with the world.

So what happened when you were in the square?
Mubarak stepped down. So then you get into storytelling: How to make a film that begins with the climax? We’re sitting in the square. Just because Mubarak is gone doesn’t mean we’ve changed the state. He’s a symptom of the problem.

We knew we really had a film, a story, when Rami – he was hailed as a hero of the revolution, turning poems into songs – he was arrested on a clearing of the square, and badly beaten and tortured. There was no coverage of this on news stations. Friends of his, friends of mine said (the injuries) was makeup, the army wouldn’t do this.  We realized there was a whole different narrative happening.

Did you camp out in the square?
Basically that’s what we did. We got an office five minutes walking distance and camped out between the square, the office and the video building. We still have the office there, from January 2011 through till now. The last thing we shot was July 2013.

How did you get people in the square to allow you to get so close?
Our hope was to make a film that was like a fiction film, following characters whose lives intertwined regardless of what happening with revolution.

I met Kareem, our producer, on the square. I started following him. And after a week he said, ‘You need a producer, I’ll be your producer.’ We had four cameras in the square. We were filming with tiny cameras. Every other camera had been confiscated. DSLR’s looks like a still camera.  That’s what I brought in. It was the first time I’d filmed with that.

What’s your view about what’s happening now?
I think right now it is a very dark time. People are being arrested. We’ve been through dark times in the past. What makes me deeply optimistic is each time we’ve been through dark times, people have risen up and changed the situation. So we don’t have a dictatorship.  I’m deeply optimistic that people will continue to fight for ownership over their future.

What was felt in January of 2011 and again in June 2013 was that people who harness their power are able to change things. At some point we have to move from the streets to the ballot box to more of a political process. But what we say at the end is we need to build a society of consciousness.