TheWrap magazine: “Every other country is used to [subtitles], so we’re going to make you guys do it, too,” star Jung Ho-yeon says

A version of this story about “Squid Game” first appeared in the special Documentary Issue of TheWrap’s awards magazine.

For decades, there has been a long-standing belief that foreign-language content doesn’t travel across American borders. But in the streaming era, that barrier has been coming down. Netflix has been leading the way with TV series like France’s “Lupin” and Spain’s “Money Heist,” which are among its most popular shows. And then there’s “Squid Game,” the South Korean thriller that is arguably the most surprising success story in TV history.

“At first when we heard that it was among (Netflix’s) top 20, we were just completely in awe because it was unbelievable. And then it kept climbing and getting higher and higher in the ranks,” Lee Jung-jae, who starred as hero Seong Gi-hun, said. “It was just amazing to see that happen.”

Director and creator Hwang Dong-hyuk’s “Squid Game” debuted on Sept. 17 to little or no fanfare outside of its home region. A month later, it would become the streaming service’s most popular original series — leaving Hollywood veteran Shonda Rhimes’ “Bridgerton” in the dust — with 142 million accounts watching at least two minutes within the first 28 days. To put that another way: That’s two-thirds of Netflix’s 214 million subscribers. Viewers have watched more than 1.6 billion hours of the nine-episode drama.

At one point, “Squid Game” was No. 1 on Netflix’s Top 10 list in 94 countries, which means that it was the top show in every country where Netflix has a Top 10 list. According to Nielsen, it’s the only show of 2021 to have more than 3 billion minutes viewed in a single week, a feat it’s accomplished multiple times. Its popularity has seen Halloween trick or treaters dress up in green “Squid Game” tracksuits (Netflix boss Reed Hastings even rocked one during the company’s recent earnings call) and the show was recently parodied on “Saturday Night Live.”

That’s not too shabby for a hyperviolent allegory that was rejected by local studios for 10 years. It’s left its stars, who also include Park Hae-soo and Jung Ho-yeon, searching for answers.

“Squid Game” centers on a group of 456 people who are in such financial peril that they agree to compete in a lucrative series of children’s games that turn out to be deadly. The show, which plays like a cross between “Black Mirror” and “The Hunger Games,” has been hailed for its unflinching portrayal of the wealth gap, which all three agree is the biggest reason for its success.

“Not just in the U.S. or Korea, but all around the world, we see the social issue of the gap between the rich and poor worsening by the day,” Lee said. “And I think that really allowed for the global audience to easily relate to the story and the theme of ‘Squid Game.’ The biggest element that really led it to commercial success would be that we told that story in a way that’s not too serious, not too heavy, but in a way that’s enjoyable.”

Park added that the success of Bong Joon Ho’s “Parasite,” a South Korean import that won the 2020 Oscar for Best Picture, as well as last year’s “Minari,” have opened up Korean content to the world. As with “Squid Game,” those films also feature a heavy emphasis on wealth inequality. 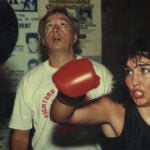 “People today have a rage about this whole wealth gap, and I think the way we just really put it out there, we express it in a direct way that led to so many people relating to it,” Park said. “I hope that the K content and drama is not going to be something that people can just choose to watch. But hopefully it’s going to be like a necessity, a must watch. And I truly hope that this will lead to more content to come that’s going to be loved globally.”

As with “Parasite,” “Squid Game” has been proving more and more that American audiences are willing to watch something with subtitles — a practice that Jung said the rest of the world has already adopted. “I didn’t know that Americans don’t like to watch movies with subtitles,” Jung said. “It can be changing. I hope so, because we’re used to it. Koreans are used to it. Every other country is used to it, so we’re going to make you guys do it, too.”

For Lee, the shocking success of “Squid Game” has even forced a reevaluation of his own future.

“I have to say that I am quite confused, to be honest. Do we continue to tell stories that only appeals to a global audience, something that’s going to speak to everyone universally? Or would it be OK for me to continue to do what I have always done, look at scripts and work on projects that I am personally drawn to and intrigued by,” he said. “Things like ‘Squid Game,’ the whole ‘Squid Game’ phenomenon, it’s not going to be something you see every day, right? It’s it’s very rare that something like this can happen.”