The Governors Awards, which takes place Saturday night at the Grand Ballroom at Hollywood & Highland, is now a real Oscar show:

Jack will be there. 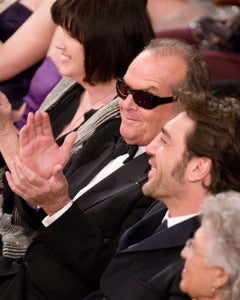 Stars and legends will walk the red carpet, shiny new Academy Awards statuettes will be handed out … and it’ll take place in front of the smallest audience to see Oscars bestowed in more than half a century.

The ceremony, set in a scaled-down configuration of the same room in which the Governors Ball is held after each Oscar show, is an experiment — and a risk, on many fronts.

It’s the first Academy event of its kind, a dramatic departure from the usual practice of handing out honorary Oscars on the main Academy Awards show.

It’s a dinner, not a television show, with footage that’ll be available online but no live TV feed.

And it’s the controversial result of an attempt to give out more honorary Oscars, unfettered by the time constraints of network television.

“Early on, we talked about whether we should try to televise it,” says Academy president Tom Sherak. “And we decided that it would be a mistake at this point to even think about doing that.

“We don’t want to turn this into another TV show and make money from it. That’s not what it’s about – it’s about honoring people in a way that we can do better than anybody else.”

The decision to move the honorary awards out of the main Oscar show has drawn criticism from those who feel that the honorary award presentations were frequently a highlight of that show, and that it disrespects Bacall, Calley, Corman and Willis to move them out of primetime and off TV altogether.

In the Guardian, David Thompson saluted the four honorees and mocked the Oscars for moving them to an untelevised event. If viewers don’t care about seeing the honorary awards, he said, “[T]he Academy might as well roll up the carpet and face the fact that the Oscars are a dying ritual.”

For years, the Academy has been trying to keep the length of the Oscarcast to three and a half hours or less; new rules that sharply restricted the honorary awards helped shorten the show, but they also meant that one or at the most two people could be honored each year.

More than one Academy governor has told me about the moment that always occurred at the annual board meeting when the names of all the honorary nominees were written on a board: “It took your breath away to see all those people listed on the board, but it was awful to realize that you could only give an Oscar to one or two of them.”

Moving the awards off the main show allowed for significantly more honorary awards, and created a new Academy event that producer Bruce Cohen was hired to oversee.

“On one hand there’s more creative pressure to invent something,” he says, “but on the other hand, because you’re not having to figure out what to do or not to to based on past events, you have a nice clean slate.”

The inspiration for Saturday night’s show, he says, came partly from the earliest Oscar ceremonies. “One of the themes for the night is to give it a very intimate, old-Hollywood feel,” he says. “We took some inspiration from the early Oscar shows, before they were telecast, when they took place in the dining room of the Roosevelt Hotel and people stood up to give toasts to friends.”

The evening will be a blend of toasts, speeches, and film packages that will run longer than the ones ordinarily seen during honorary Oscar presentations. (Filmmakers Jon Bloom and June Beallor are putting the packages together.)

“One of the biggest advantages is the lack of the time constraints of live TV,” says Cohen. “On the Oscars, there’s always been a very strict time limit to those presentations, because they are just a small part of the festivities. Whereas in this event they’re the only festivities, and our goal is to celebrate and pay tribute to those four honorees in a more substantial way than you would be able to do on the Oscar broadcast.”

At the same time, I hear that Cohen and producer Don Mischer have been trimming the show this week, cutting speeches and trying to streamline the evening. “I think they want quick and breezy,” says one participant, “but we seem to be getting more and more stuff.”

The evening will be taped, and footage made available on the Academy website and to other interested parties.  (It will also be delivered to Calley, who is too ill to attend.)  Some footage will likely be shown on the main Oscar show on March 7, though Cohen says that decision rests with Oscar show producers Bill Mechanic and Adam Shankman.

Initially, all 6,000 Academy members were invited to buy tickets for the show, with the understanding that a lottery might need to be instituted to allocate the 550 or so seats in the ballroom. This year, no lottery was needed; next year, Sherak says, he expects things to be different.

“My hope is that when people walk out of there, they’ll be telling everybody, ‘Oh my gosh, you should have been there,’” he says. “And next year, we might have to do a lottery.”

For now, Cohen shrugs off the controversy as he gets ready for the show.

“I can’t really speak to whether these awards should be on the main show or not,” he says. “The only thing that I can speak to is the hope that for the honorees themselves, the presentations will absolutely be a night that they will always remember, and a huge life highlight. We can’t really get involved in ‘Is it better this way or that way?’ We can only hope is to give these four people the night of a lifetime.”

And, by the way, he hopes to make everybody in the audience cry.

“That would certainly be one of the things we’re shooting for,” he says with a chuckle. “They laugh, they cry, they eat good food.”