The greatest trick J.J. Abrams pulled when recreating “Star Trek” was assembling the first cast in the property’s long history with charisma to rival the original crew led by William Shatner and Leonard Nimoy. Abrams’ energetic 2009 reboot powered through any story and character issues on the strength of pure personality.

Justin Lin achieved a similar feat in the “Fast and Furious” series, building a sprawling character ensemble into the main attraction of the franchise. That experience made Lin a smart choice to take the helm of “Star Trek” after Abrams teleported away to “Star Wars.” Indeed, Lin’s first spin in the Enterprise is cut from the mold of his muscle-car sequels, as it opts to exploit the cast’s facility with their Starfleet personas rather than boldly going where no “Star Trek” has gone before.

“Star Trek Beyond,” a phrase that is title and tagline in one, doesn’t much capture the tone of this action-oriented mission. The title suggests a far-flung adventure in space, perhaps something along the lines of the hardcore science fiction of “Star Trek: The Motion Picture.” In fact, “Beyond” is quite familiar, with a structure that marries modern blockbuster form to a plot outline that could easily be at home in the 1960s original series.

A distress call leads Kirk (Chris Pine), Spock (Zachary Quinto) and crew deep into a nebula (from which, naturally, communication is cut off), an encounter with a foe of overwhelming power, the destruction of the Enterprise, and a scramble to escape an alien planet. The crew is splintered into disparate pairs: gruff Bones (Karl Urban) and logical Spock learn to trust one another; the complementary Kirk and Chekov (the late Anton Yelchin) move the plot forward; Scotty (Simon Pegg, who also co-wrote with Doug Jung) encounters resourceful warrior Jaylah (Sofia Boutella, “Kingsman: The Secret Service”), who, like the Enterprise crew, has fallen victim to angry villain Krall (Idris Elba). 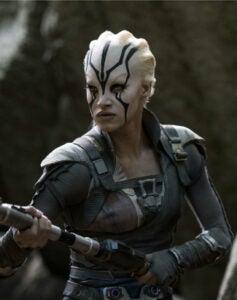 After indulging an extended early setpiece in which the Enterprise is attacked by Krall’s swarming fleet of drones, Lin nimbly cycles through each of those duos in succession, punctuating their survival efforts with expository scenes featuring Uhura (Zoe Saldana), Sulu (John Cho) and other Enterprise survivors held by Krall. The spotlight steadily pans across , training on moments of doubt, comedy and triumph. Some stories are told in a single shot, as when Sulu is briefly reunited with his husband (played by Jung), their relationship told in the easy movement of a walking embrace.

With the 2009 reboot and 2013’s “Star Trek Into Darkness” behind them, the ensemble is confident and mature in this revamped vision of the well-known crew. Most impressive is newcomer Boutella, whose chiaroscuro warrior is fierce, smart, and memorable. Boutella’s action chops, seen previously in “Kingsman,” aren’t exploited to a satisfying degree, but in every other regard she’s the film’s standout.

Screenwriters Pegg and Jung open “Beyond” with Kirk detailing the monotony of years in space: days that blend into a grey mass, routine tasks taking over, petty interactions blown out of proportion. It’s an effective illustration of an aspect of “Trek” that is often ignored in the feature films, and an introduction to Kirk’s maturity as he wrestles with comparisons to his father. “Beyond” sees several characters grappling with responsibility to family and the weight of loss, and pays dignified homage to the late Leonard Nimoy. Anton Yelchin, who died in an accident a month prior to the film’s release, is honored by his significant screen time and effective performance.

Still, this is an action movie at its core, if also a less frenetic film than the prior two Abrams efforts. At times Lin’s camera takes the idea of zero gravity literally, floating, tilting and swooping over ship hulls, across craggy rock faces, through the ruined Enterprise. The motion suggests both grace and instability, but at times seems designed simply to avoid the grey corridors of TV “Trek.”

Lin’s visions fare best when writ large. The sweep of an attack on the Enterprise is dizzying and intense; the spectacle of a moon-size space station, designed like a spheroid set of Moebius strips in which gleaming skyscrapers grow “up” towards one another, is among the best images of Starfleet’s utopian achievement. The director is willing to set aside logic in favor of movement and energy — it’s best not to wonder precisely how some of Jaylah’s combat devices work, for example, because the movie isn’t interested in explaining.

Without a TV series to bridge long gaps between movies, each new “Trek” film has shouldered the burden of being many things to a large and varied fanbase. “Star Trek Beyond” forges a path right down the middle of the franchise’s well-defined lane, playing more like a greatest-hits compilation than anything new. Given the various low points in the 13-film series, that’s not a bad thing.

This episode cuts right to the core of the series’ original appeal, giving the terrific cast a chance to play against one another in a straightforward story. It’s not exactly bold, but “Beyond” does satisfy.

'Star Trek' 101: The Weirdest Episodes, From Tribbles to The Rock (Videos)

Tribbles, holodeck fantasies and Abe Lincoln are a part of the goofy side of the ”Star Trek“ universe

"Star Trek" has become known as a series filled with serious examinations on ethics and philosophy. But with over 700 episodes over five series, there are bound to be some that... to put it charitably... are completely insane. Here are the weirdest "Star Trek" episodes ever, ranging from fun classics to writer-room monstrosities.
View In Gallery
x