“Star Trek: Picard” will end with Season 3, but it’s going out with a bang.

The announcement was accompanied by a clip, where the actors could be heard as the camera focused on Stewart’s Jean-Luc.

“I remember watching the premiere of ‘Star Trek: The Next Generation’ almost 34 years ago with my father like it was yesterday. It was the spark that ignited my love for science fiction,” Terry Matalas, Season 3’s showrunner and executive producer, said in a statement. “So, it’s most fitting that the story of Jean-Luc Picard ends honoring the beginning, with his dearest and most loyal friends from the U.S.S. Enterprise. It would be an understatement to say that giving these characters a proper send-off is an honor. The entire ‘Star Trek: Picard’ team and I can’t wait for fans to experience this final, high-stakes, starship-bound adventure in Season 3!” 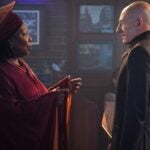 The announcement comes on a special day in the “Next Generation” world. April 5, 2063 is the day humans make first contact with Vulcans. April 5 is also known as First Contact Day.