During the 4th inning of Game 7 of the World Series between the Dodgers and Astros, a brand new TV spot for “Star Wars: The Last Jedi” dropped on unsuspecting audiences nationwide.

While echoing parts of the second trailer for the next “Star Wars” flick that landed in early October — like when Luke Skywalker (Mark Hamill) emphatically declares that “This is not going to go the way you think” — we are treated to a few tantalizing new shots, at least once of which will hit “Star Wars” fans right in the nostalgia feels.

Another tantalizing new shot in the 45-second mini-trailer is a look at what appears to be Supreme Leader Snoke’s First Order throne room. It’s an appropriately stark and generally disconcerting image — one which, in the tradition of these movies, evokes imagery of Nazi Germany with its color scheme of deep reds and blacks. Look at how creepy this is. 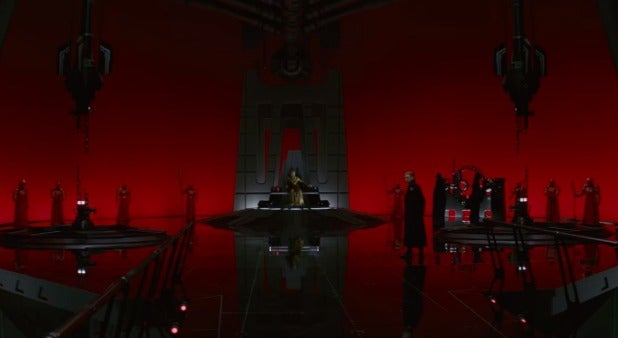 Meanwhile, the spot brings back that screaming porg everyone likes so much, Kylo Ren punching inanimate objects, the Falcon flying through a really cool-looking cavern full of large red crystals.

You can view the TV spot above.