Disney and Lucasfilm are firing back at trolls who are unhappy with the addition of Black actress Moses Ingram to the “Star Wars” universe. In a pair of tweets this week, the franchise had a simple message: “don’t choose to be a racist.”

Ingram made her debut on “Obi-Wan Kenobi” last week, where she stars as Reva, the Inquisitor. Reva is obsessed with hunting down Obi-Wan to bring him to Darth Vader; apparently, she believes that she’ll get “what I’m owed” if she does. She’s ruthless and strategic, taking down anyone who gets in the way of her goals (as any Sith would).

“We are proud to welcome Moses Ingram to the Star Wars family and excited for Reva’s story to unfold,” the official “Star Wars” account tweeted on Monday. “If anyone intends to make her feel in any way unwelcome, we have only one thing to say: we resist.”

The account then followed up with a sassier tweet, saying “There are more than 20 million sentient species in the Star Wars galaxy, don’t choose to be a racist.”

The official response from Lucasfilm comes after Ingram posted some of the horrible messages she’s received to her Instagram story. People wrote things like “You’re a diversity hire and you won’t be loved or remembered for this role” and “You have now been converted into the Saint George of Floydium of Star Wars, are you happy.”

“Long story short, there are hundreds of those. Hundreds,” Ingram said in a follow-up video.

“I think the thing that bothers me is that like, sort of this feeling that I’ve had inside of myself — which no one has told me — but this feeling of like, I just gotta shut up and take it, you know? I just kind of got to bear it and I’m not built like that,” she added. “So I really just wanted to come on, I think, and say thank you to the people who show up for me in the comments and the places that I’m not going to put myself. And to the rest of y’all: y’all weird.” 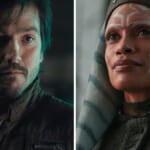 For many fans, the fierce defense of Ingram on the “Star Wars” social media account was more than welcome. But, others argued that the same energy and devotion wasn’t put into defending John Boyega, Kelly Marie Tran and others from similar racism when they joined the fold in “The Force Awakes” and “The Last Jedi” respectively.

“This is wonderful and important but I can’t help but wonder why there was no defense like this for john boyega, kelly marie tran, ahmed best, etc,” one person tweeted. “This should’ve been the standard since the beginning, but those people were bullied/harassed so much they had to leave social media.”

Others echoed similar sentiments, with some even encouraging the studio to apologize to Boyega. You can check out more reactions below.