Lucasfilm and Disney rolled out the official poster for “Star Wars: The Force Awakens” Sunday and fans went wild.

Advance tickets for the blockbuster-to-be will go on sale Monday after the trailer debuts during “Monday Night Football” on ESPN, which is owned by Disney.

To build excitement for the trailer’s launch, the official “Star Wars” Twitter account shared an image of the poster Sunday at 9 a.m. PT, along with the message: “Check out the new official poster! Tune in to @ESPN’s Monday Night Football for a new look at #TheForceAwakens.” 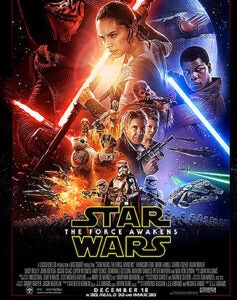 The hashtag #TheForceAwakens immediately became a trending topic and within a few hours, that post had been retweeted more than 25,000 times.

Fans liked what they saw, with one Twitter user writing in all caps: “I CAN NOT WAIT I LOVE @starwars DAM ITS KILLNG ME.”

Another tweeted: “there has been an awakening, have you felt it?”

While a self-proclaimed “geek” added: “Don’t think I’ve ever been this excited about a film poster before!”

Spanish speaking fans got in on the action too, with one woman tweeting in español: “I’m dying, I need to see it. #TheForceAwakens.”

Also Read: Why 'Stars Wars: The Force Awakens' Could Be Christmas Gift for Rival Studios

The film storms into theaters on December 18. Check out some of the tweets below:

the official star wars: the force awakens poster has got me feeling some type of way

2 months til the force awakens

The 6th stormtrooper from the left on the poster is so obviously Daniel Craig………. #TheForceAwakens #danielcraig

As much as I dislike seeing multiple trailers for a movie because they tend to be spoilerific, I'm excited for The Force Awakens trailer!

there has been an awakening, have you felt it? #TheForceAwakens

Don't think I've ever been this excited about a film poster before! #StarWars #TheForceAwakens

Really not feeling the hype of #TheForceAwakens

Upset that someone got cast in the new ”Star Wars“ movie that you didn’t want to? Chill out. Here’s 10 examples proving their performances might surprise you.