The full theatrical trailer for “Star Wars: The Force Awakens,” which premiered during the halftime show of ESPN’s “Monday Night Football,” featured familiar faces, new compelling new characters, and the inevitable conflict with the Dark Side.

The teaser lured fans of George Lucas‘ iconic franchise to the New York Giants vs. Philadelphia Eagles game on the sports network, which like Lucasfilm, is owned by Disney.

In one snippet, Harrison Ford‘s Han Solo and Chewbacca are seen with their hands over their heads, and viewers also got a fleeting glimpse of Carrie Fisher as P

While his face wasn’t revealed, a hooded figure with a robotic hand reaching out to R2-D2 is thought to be Luke Skywalker (Mark Hamill).

Meanwhile, new villain Kylo Ren (Adam Driver) makes a chilling appearance as he promises Darth Vader’s crushed mask: “I will finish what you started.” Other scenes showed hundreds of Stormtroopers lined up in formation, and TIE Fighters taking to the skies. 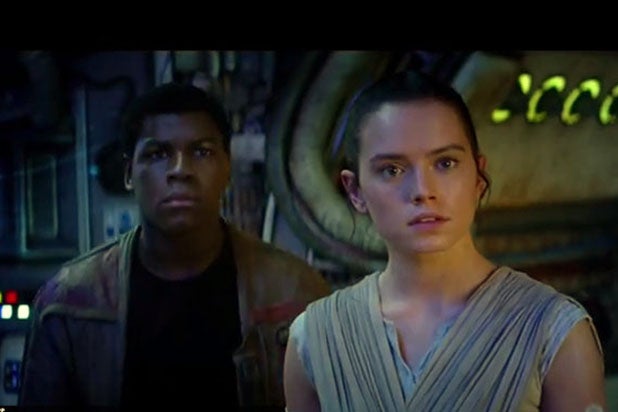 “There are stories about what happened,” Rey says to Solo, who replies: “It’s true. All of it … the Dark Side, the Jedi, they’re real.”

Tickets were not supposed to go on sale until after the new “Force Awakens” trailer aired, however they went live around two hours before the teaser hit small screens with many fans suffering slow response times or flat-out crashes as the platforms were flooded.

“Star Wars: The Force Awakens” will have its world premiere in Los Angeles on Dec. 14 — 38 years after George Lucas‘ original “Star Wars” debuted at Hollywood’s Chinese Theatre in May 1977. 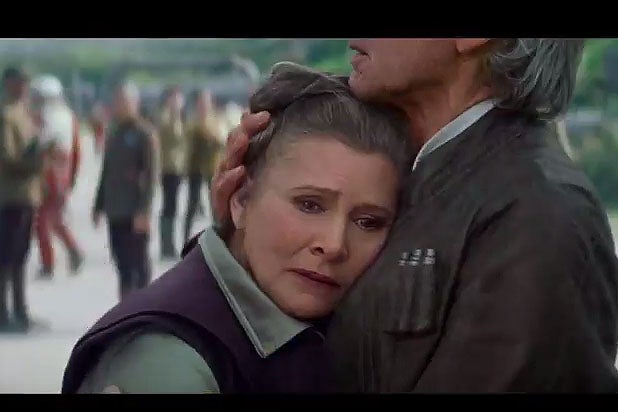 To commence the countdown for the trailer’s launch, Disney released the sequel’s official theatrical poster on Sunday, and the new artwork immediately became a trending topic on Twitter.

The seventh episode in the beloved science fiction franchise will hit theaters around the world on Dec. 18.

Fandango and MovieTickets.com are expecting record-breaking sales given the immense anticipation from fans. Some industry observers believe that “Force Awakens” could gross $1 billion at the domestic box office alone. “Avatar” holds the domestic record with $760 million.

With the cast of ”Episode VII“ finally unveiled, TheWrap looks back at major developments that slowly unfolded since Disney announced a new trilogy in 2012