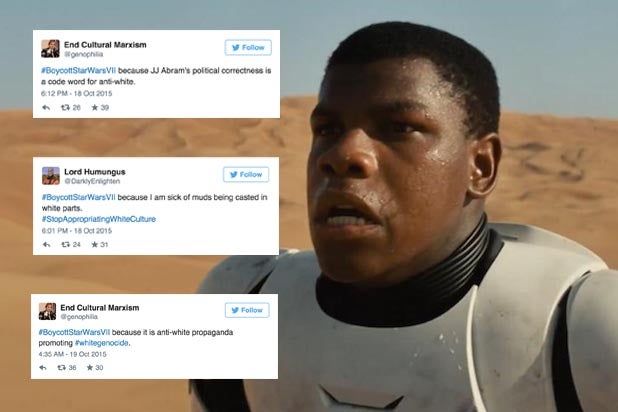 #BoycottStarWarsVII became a trending Twitter topic Monday, but not because there’s any legitimate reason to protest “Star Wars: The Force Awakens.” Instead fans are unifying against the notion that John Boyega was cast solely for the sake of racial diversity.

While #BoycottStarWarsVII hardly qualifies as an organized movement, it’s certainly generating a ton of talk.

Also Read: 'Internet Trolls' Are Actually Jerks in Real Life Too, According to Study (Infographic)

The hashtag appears to have been launched by Twitter users — commonly referred to as trolls — who are simply trying to get a rise out of people they perceive as social justice warriors, or “SJWs.” And their mission was accomplished, because the hashtag is the No. 2 trend worldwide, at the moment, since people started arguing against such a boycott without really caring where or how it started.

See Video: 'The View's' Candace Cameron Bure Lashes Out at Online Haters: 'You Don't Have to Verbally Abuse Me and Rape Me'

Here are a few of the trolls inciting the online riot:

#BoycottStarWarsVII because I am sick of muds being casted in white parts. #StopAppropriatingWhiteCulture — Lord Humungus (@DarklyEnlighten) October 19, 2015

#BoycottStarWarsVII If white people aren’t wanted in Star Wars, then our money must not be either. — Critical Spooking (@officialCritDis) October 19, 2015

Then why do these SJWs care? It’s they who made this trend, not us. Thanks by the way. #BoycottStarWarsVII https://t.co/DMEVU23mRU

And they’re getting a kick out of the critical media coverage from outlets like Salon, International Business Times, and the feminist blog The Mary Sue. Maybe TheWrap soon, too.

While the trolls are counting this as a successful faux outrage campaign, society scores big here, too. The vast majority of people using the hashtag have good intentions: kicking racism to the curb. And it’s not so far fetched that a “group,” as some media outlets have labeled the trolls, would stoop to this level.

After all, Boyega has responded not just once, but twice to outrage from a minority of fans after the first teaser for the upcoming J.J. Abrams blockbuster revealed he plays a black stormtrooper, which some believed was out of step with the “Star Wars” universe and cited the prequels as proof that theimperial army consisted of “white clones.”

If the trolls launched #BoycottStarWarsVII in hopes of exposing how quick “social justice warriors” are to sticking up for equality, then they’ve no doubt succeeded. But so what? While the trolls can take pride in knowing they’ve stirred the pot, the rest of us should take pride in how quickly “Star Wars” fans were to place any concerns over the movie’s alleged “anti-white” agenda in the “stupid” category.

Take a look at some of the smartest responses to #BoycottStarWarsVII.

If #BoycottStarWarsVII results in cinemas being free of racists, all the better. – Mark Burnley (@DrMarkBurnley) October 19, 2015

#BoycottStarWarsVII is a bunch of idiots saying their not going to see #TheForceAwakens. Good, that means I don’t have to sit beside them – Arrogant Alien (@SonofArrogance) October 19, 2015

Racists should boycott all Star Wars movies, not just #BoycottStarWarsVII, because they are all about non-Earthlings. #EarthlingPride

#BoycottStarWarsVII is no laughing matter, if they follow through on their threat it could cost Disney around 60 dollars at the box office. – David Franklin (@davefranklin) October 19, 2015

#BoycottStarWarsVII folks, Lemme get this straight: Wookies, Ewoks & Droids are fine but a BLACK PERSON is a problem? Go home.You’re Drunk.

But in the interest of giving credit where credit is due, it appears this dude was the first person on the planet to advocate #BoycottStarWarsVII