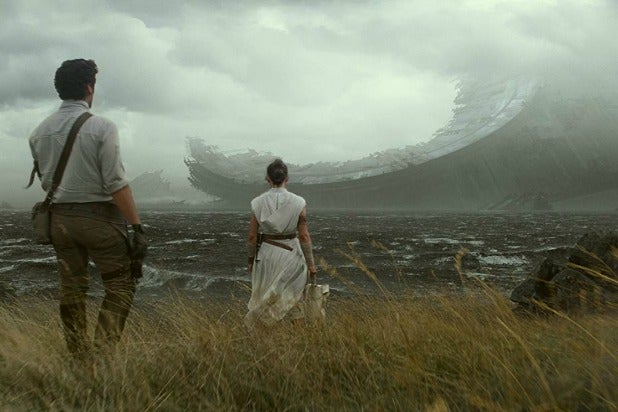 (We’ve got some major spoilers for “Star Wars: The Rise of Skywalker” in this article)

A “Star Wars” movie can only do so many callbacks before it starts to feel like a parody of itself. We saw that happen with “Solo: A Star Wars Story” last year, and it happened again in “Star Wars: The Rise of Skywalker,” which takes its references to the original trilogy bit too far when it trots out the “largest fleet the galaxy has ever seen” — a fleet that happens to be made up entirely of Death Stars.

OK so let’s talk about this. At the very beginning of the movie, the Emperor (Ian McDiarmid) reveals that he has a giant fleet of Star Destroyers that he’d kept hidden under the ice on Exegol for who knows how long. If Kylo Ren proves a suitable successor to Palpatine’s Sith legacy then the First Order gets to have this fleet. Allegiant General Pryde (Richard E. Grant) remarks later that if they get that fleet it’ll increase their military strength “ten thousand fold.” And then, just before the final battle, we learn that every single one of those Star Destroyers has a Death Star superlaser that can blow up a planet.

Also Read: The 21 Worst Parts of 'Star Wars: The Rise of Skywalker'

This is a truly unbelievable revelation. The Empire just trying to fix every problem with a Death Star has been a joke among “Star Wars” fans for decades. It was a bit surprising, because of that, that folks embraced “The Force Awakens” after it presented an extra large Death Star that could blow up several planets at the same time. But this is something else. This is a fleet, referred to in the movie as the biggest fleet the galaxy has ever seen, that is made up entirely of Death Stars. It’s a fleet that is so big that it has 10,000 times the power of the First Order fleet that just conquered the entire galaxy.

So we’re talking about literally thousands of Death Stars. A threat so gargantuan, and never even hinted at before “The Rise of Skywalker,” that it makes everything that happened before in this entire franchise seem like minor conflicts — like the previous eight movies are all “The Hobbit,” and “The Rise of Skywalker” is “The Lord of the Rings.”

I’ve got so many questions about all these mini Death Stars. If the Emperor was just hiding out on Exegol for 30 years, then where did he get the biggest fleet in galactic history from? Why did the First Order, which Palpatine was secretly the leader of the entire time, have to completely build its own fleet of new Star Destroyers from scratch if the Emperor had that fleet? Why would they build a giant Death Star, presumably at his command, when he’s got those Death Stars just sitting there in the ice, plus the technology to apparently affix a Death Star laser to any capital ship?

But this article is not about those questions, to which there are no answers right now. Right now all I’m trying to do is remind everyone that “The Rise of Skywalker” has too many Death Stars. Adding a fourth Death Star in six movies would be silly. Adding thousands of Death Stars all at once is parody. Except “The Rise of Skywalker” is an actual mega-budget “Star Wars” movie, not some cheap farce thrown together by the “Meet the Spartans” guys. They put a fleet of Death Stars in this movie, and it wasn’t intended to be funny.