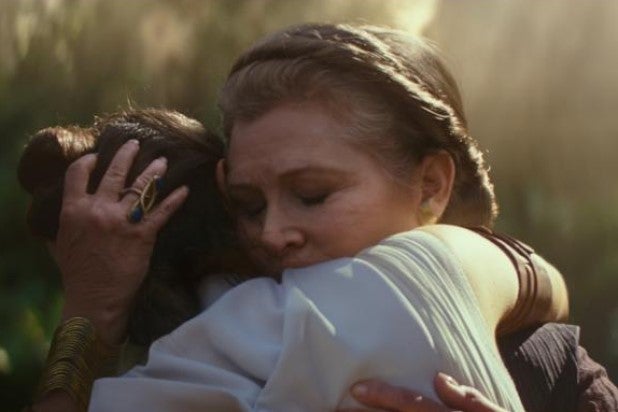 If you’ve already seen “Star Wars: The Rise of Skywalker,” you may be surprised how the filmmakers managed to use deleted scenes from “The Force Awakens” of Carrie Fisher’s performance in order to tell the rest of Leia’s story. What you still didn’t see is that there’s even more footage of Fisher on set that didn’t make it into the “Star Wars” finale.

“Skywalker” screenwriter Chris Terrio told TheWrap that the very first thing he and director J.J. Abrams did upon writing this film was to determine how to complete Leia’s story without the aid of Fisher, who died in December 2016. Terrio would regularly sit with Fisher’s old dailies from “The Force Awakens” to find out how they could weave the various bits and pieces of her outtakes into a new narrative, and he said there’s still incredibly entire scenes that didn’t make the final cut.

“That was the very beginning of the process, sitting with Carrie’s dailies, figuring out what could be used, what couldn’t be used, where will the eyelines work, how do we re-contextualize this footage to make it work with this new story,” Terrio said. “There is stuff out there. It may be on deleted scenes or something, but there are things that didn’t quite make it in, in fact one or two scenes I really liked that didn’t make it in, but to keep the film moving, I totally understand the reasons why those things were cut. But there is certainly other glimpses of Carrie that didn’t make it.”

But it was also important to Terrio and Abrams to honor the specifics of Fisher’s performance, and Terrio clarified that what you see in “Skywalker” is never dubbed or digitally manipulated; it’s all the real thing.

“Every time you see her speaking, that’s really Carrie speaking. We didn’t use any on-camera lines that she didn’t say,” Terrio said. “It was important to us that every time Leia says a line, it was really a line that Carrie said and that the way we created the scene around her, her acting intention was relatively intact.”

Terrio and Abrams even made sure that the context in which you see Fisher didn’t betray her intention from “Force Awakens.” If they wanted a sadder, more tender scene, it had to be a similar moment from “The Force Awakens.” If she’s more ironic or funny, as in one of Terrio’s personal favorite scenes in “Skywalker” that she shares with Kelly Marie Tran’s Rose Tico, it had to be of the same tone from the deleted scenes.

Abrams recently called incorporating Leia into the story as the most challenging aspect of “Skywalker,” both on a technical level and an emotional one for the actors who managed to perform without having Fisher there.

“On ‘Force Awakens’ I was miserable we were cutting these scenes. How do we cut anything that had Carrie in it? And weirdly, it was a gift for this movie,” Abrams told SiriusXM’s “Stars.” “Figuring out how to incorporate that footage was a bit like doing a Sudoku, you have these blank pieces but you have these things that exist, so how do you make the entire thing work with just this piece or that piece?”

In terms of the specifics of the story, Terrio and Abrams decided that “The Rise of Skywalker” needed to fulfill a promise of “there is another” that was established in George Lucas’ original “Star Wars” trilogy, the idea that Leia too has great strength with the Force and needed to herself “join the Jedi pantheon.” He added that they even discussed this idea with Lucas himself.

“The force runs strong in that family, but Leia is as strong as Luke and she could be a great Jedi, but she chose a different life as a senator, then as a general, but she also had a Jedi path in front of her at one time,” Terrio said. “We discussed it with George early on, the promise of Leia. So we had the challenge of trying to put Leia in the Jedi pantheon and make this film really about Leia ascending to join her brother, but do it without Carrie. So we came upon the idea of there was someone who would finish Leia’s Jedi training for her.”

That person of course is Rey, but there’s complications there that you’ll just have to see “The Rise of Skywalker” to find out.