After years of live-action movies and series, animated shorts, even LEGO specials, “Star Wars” is officially entering a new galaxy: anime. And in the first trailer for “Star Wars: Visions,” fans are getting a good look at a whole batch of new characters.

“Lucasfilm is partnering with seven of the most talented anime studios in Japan to bring their signature style and unique vision of the Star Wars galaxy to this inspired new series,” James Waugh, executive producer and Lucasfilm Vice President, Franchise Content & Strategy, said in a statement. “Their stories showcase the full spectrum of bold storytelling found across Japanese animation; each told with a freshness and voice that expands our understanding of what a Star Wars story can be, and celebrates a galaxy that has been such an inspiration to so many visionary storytellers.” 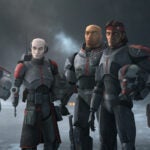 Though many of the characters may be new, some of the scenery is not. The trailer gives a quick glimpse at the pod racing track on Tatooine, where a young Anakin Skywalker won his new Jedi friends the needed parts to repair their ship (and unknowingly, his own freedom). Evidently, it’s still a popular spot, and is set to be the location of their “best show ever.” Whether that show is still pod racing is unclear.

“Star Wars: Visions” premieres on Disney+ on September 22. You can watch the full trailer for the series above.