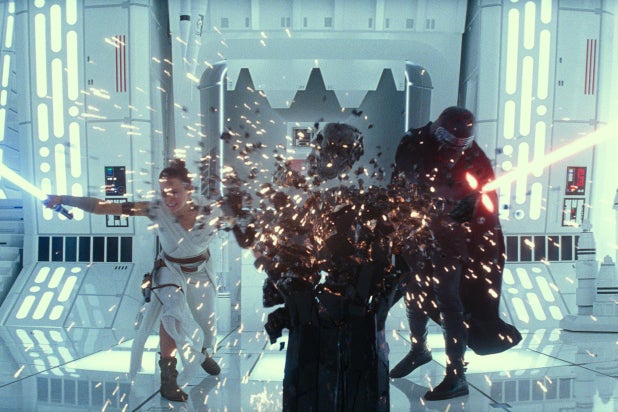 (This post contains spoilers for “Star Wars: The Rise of Skywalker”)

Chris Terrio, the screenwriter for J.J. Abrams’ “Star Wars: The Rise of Skywalker,” disagrees with critics and fans who have argued that the finale to the Skywalker saga undoes much of what was established in Rian Johnson’s “The Last Jedi.”

“I think they’re missing the point, which is that they’re in dialogue with ‘Episode VIII,'” Terrio told TheWrap ahead of the film’s release. “It’s not that it’s a meta-story or a rivalry between Rian and J.J. Rather, it’s about taking the ideas that came from ‘VIII’ and trying to complicate them and develop them and to have some new surprises.”

Also Read: JJ Abrams Says 'Star Wars: The Rise of Skywalker' Critics Are 'Right' - But So Are the Ones Who Loved It

The first thing Terrio clarified is that even though Colin Trevorrow is still given a story credit on “The Rise of Skywalker” despite leaving the project, he and Abrams “started from scratch” on the film and worked “from a blank page.”

“We are both a little superstitious about starting with material that might lead us in a direction that’s different than the one we might’ve gone in naturally. So we didn’t begin with the previous script,” he said. “There may have been certain elements that we used that had been in the original script and we weren’t aware of it. The Guild makes the determination about those things. We didn’t have a bad relationship to Colin’s material. We just didn’t start with it. It’s not a juicy story of intrigue or anything.”

Terrio’s challenge on “The Rise of Skywalker” was to complete Leia’s story without the aid of Carrie Fisher, who died in December 2016. He explained more about that process here. Terrio and Abrams wanted to fulfill the promise from the original trilogy that “there is another” and show that Leia is as strong with the Force as Luke. The difference is that Leia chose another life rather than become a Jedi, and she looked to Rey to finish her Jedi training for her.

Of course, we learned that Luke and Leia both knew all along that Rey is Emperor Palpatine’s granddaughter. This rankled many critics who were frustrated at one of the previous movie’s biggest twists where Kylo Ren told Rey that her parents were no one of significance. Terrio argues that this reveal is in dialogue with “The Last Jedi” rather than just a ret-con of it. Rey got what appeared to be the most troubling news imaginable in “The Last Jedi,” but “The Rise of Skywalker” makes her outlook even worse.

“When Rey learns that Leia always knew, that she was the grandchild of her greatest enemy, a Palpatine, she trained Rey anyway, because she understood that blood is not destiny,” Terrio said. “That moved us a lot, that a child of Palpatine should be the apprentice of two Skywalkers, and Rey, who is really royalty of the Dark Side, should be the one, raised as an orphan, a beggar, a scavenger, literally living in the ruins of the war that her ancestors created. That there’s this idea the royalty of the Dark Side was put in a basket and floated down the river, to then grow up in the most improbable of circumstances and then finally to be offered the throne, felt extremely strong to us.”

Terrio added that anyone who thinks he and Abrams ignored the direction of “The Last Jedi” or countered it rather than developed and deepened it, as TheWrap’s own critics have suggested, are “not understanding how writers think.”

“We thought that was a more dramatically interesting predicament for ‘Episode IX,’ not only that everything is resolved and that Rey is at peace with her past, but that she has even worse information than ‘Episode VIII,’ Terrio said. So I think it’s a development of dramatic ideas, and it’s not a rejection. And I think that when critics try to act as though our film is some sort of spat between two directors, they’re not understanding how writers think.”

For one, it’s been pointed out that Kylo Ren suddenly has his old helmet back after abandoning it in the last film. Terrio rejected the idea that he and Abrams were “backtracking” to “The Force Awakens,” arguing that the new veiny, red cracks in his helmet are a continuation on a metaphor, that Kylo’s literally a broken person wearing a broken mask.

Other defenders of “The Last Jedi” admired that Johnson’s story did away with a problematic trope in “Star Wars” films, that only those with royal bloodlines can be gifted with the Force. Terrio didn’t want to betray that notion either, and making Rey come from royal blood was meant to resolve the generational war between the Skywalkers and Palpatines that dates back even to the prequels. For instance, Terrio said the movie strongly implies Finn and others in the galaxy still have Force strength as well and by giving Rey a more mythic backstory “doesn’t detract at all from the democratization of the Force.”

And what about Kylo’s line “let the past die,” another “Last Jedi” moment critics have argued “The Rise of Skywalker” has undone?

Terrio knew about the polarized fan reaction to “The Last Jedi” and that anything they did would be cause for outrage and debate. But above all, he and Abrams are fans too.