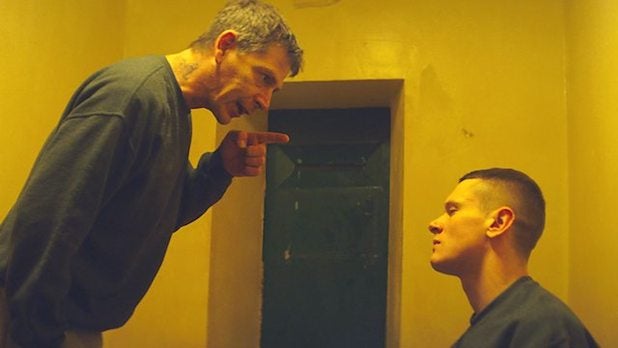 Jack O’Connell (“Unbroken”) delivers a dynamite breakout performance as Eric Love, a troubled teen with a violent history who’s prematurely transferred from an institute for young offenders to an adult prison — the same one that his estranged father Neville (Ben Mendelsohn) calls home. A prime candidate for rehabilitation, Eric is admitted to an anger management program run by the prison’s unconventional therapist (Rupert Friend), who tries to help Eric help himself while he still can turn his life around.

Steering clear of most prison movie cliches, “Starred Up” boasts a 98% fresh rating on Rotten Tomatoes, with critics hoping American audiences will seek out the indie gem.

Mackenzie spoke to TheWrap in advance of the theatrical release of “Starred Up,” which was written by Jonathan Asser and produced by Gillian Berrie.

TheWrap: Standard ice-breaker question here, but how did you initially get involved in this project?
Mackenzie: My company came across Jon’s [Asser] script. It was a spec from a first-time writer. I read it and liked it. It had a strong sense of authenticity and anger, and it felt like a really good chance for me, in the place I was at at the time, to work with that material and focus on the authenticity more than the films I’d done before. I embraced the project and we worked together tooling around with it.

Had you been looking to direct a prison movie or was it simply luck of the draw?
I had been looking to do something that was a bit tougher and I always tried to avoid making genre films. I feel like it’s a box you can get stuck in. There are so many ways to make a prison movie. We took a straight genre line but wanted to smuggle in some other things, some strong emotions, to give it a bit of heart and soul. It has all the ingredients of a genre movie but we also reveal a soft center under the hardness.

Also read: Jack O’Connell on ‘Starred Up’ and His Troubled Past: ‘I Really Had To Dig Deep to Get a Second Chance’

What I found refreshing about “Starred Up” is that unlike most prison movies, there’s no illusion of escape. It’s about survival and living day-to-day behind bars. Can you talk about that decision?
Yes, how do we survive? Prison movies tend to be escape movies, but there was no chance of escape here. I was very conscious of that, which is why I didn’t really want to have an establishing shot of the prison. I wanted everything to play out from the inside. There’s a wide shot in the exercise yard, but I wanted you to see the closed quarters of the jail.

Jack O’Connell is a revelation in this movie, which in turn helped him land the lead in Angelina Jolie‘s “Unbroken.” How’d you settle on him?
The weird thing about Jack is, he’s been around. He hasn’t been hidden. He was on “Skins,” which I wasn’t a follower of because it’s beyond my generation. But Jack auditioned for me, first on tape and then in person. He was just the right guy for the job. It was obvious he was going to be brave enough to take that character all the way, and he did. To go on that journey with him was fantastic. We had a casting director who was also fantastic, and Ben [Mendelsohn] and Rupert [Friend] just slotted in together quickly. It was how you normally cast.

The threat of violence hangs over every frame of this film. Did you use any real ex-cons in in the cast?
Four of the smaller parts are played by people who used to be in Jonathan’s groups in the jail where he worked. They helped us with questions of authenticity — if something was plausible or not. Prison life is about rhythms and routines, so we wanted to get that right, along with the sense of tension and danger.

Is the film based in part on Jonathan’s experiences with violent offenders?
Jonathan is very close to the character that Rupert plays. There’s a method of therapy that allows the most violent prisoners to get treatment, but they have to prove themselves to be violence-free in order to get it, which is strange of itself. Jonathan got them talking to each other and learning to de-escalate some of the feelings of anger they were grappling with. Things escalate and then de-escalate, and I thought that was really exciting. We did a rehearsal with people from Jonathan’s group and things got a bit tense, but we were blown away by how powerful the de-escalation was.

Did you shoot at an actual prison?
We shot at a former prison in Belfast, Ireland. You could feel the atmosphere in the walls and the doors. It was totally a character on its own, because going in to work there reminded us of what we were doing. It’s in all the pores of the movie.

I love the “Starred Up” trailer and the song it uses. Did you have any say in that decision?
It’s a great song but it’s not in the actual movie. I’ve always been interested in music, so I did the soundtrack myself with Tony Doogan. It’s buried in the film, just bubbling under the surface, but I’m pleased to say that we’re doing a mini-release of the music fairly soon.

I know you’re being bombarded with offers, so what’s next for you? Have you settled on a follow-up?
“The Mission” is happening [at Warner Bros.], I hope, but I’m also developing a few other projects at my production company in Glasgow, Scotland.