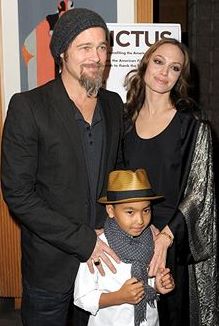 Eight-year-old Maddox Jolie shocked the crowd (but pleased the MPAA) by bringing parents Angelina Jolie and Brad Pitt (left; all photos by Getty Images) for guidance to Thursday’s premiere of “Invictus,” which is rated PG-13. 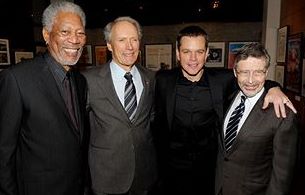 team unspooled the film at the Academy’s Beverly Hills HQ before heading over to the Beverly Wilshire Hotel for an intimate after-party. The film opens Friday. 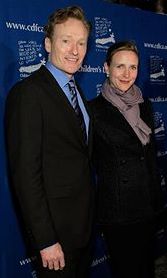 Hours after Comcast planted its flag atop NBCU, O’Brien kept mum on the new ownership, instead letting his “Tonight Show” musical tribute sing for itself. He hustled inside the Beverly Hills Hotel to join Jennifer Garner, J.J. Abrams and charity fixture Jane Kaczmarek.

Jim Carrey has played the Grinch and Scrooge, but not since “The Cable Guy” has he played a driver. But Carrey did just that Wednesday night, pulling up to the blue carpet and dropping off Jenny McCarthy to promote her new sweat-along fitness game Your Shape at Hyde. Like Christmas coal for the waiting photogs, he then sped off.

The game itself comes with a camera to perch atop the Wii system, creating a live video split-screen alongside the digital gym. If you’ve been overeating this holiday season, be warned: A digital McCarthy avatar tracks your movements and scolds you to “keep up.” Taryn Manning and Ashley Jones (“True Blood”) kept up just fine.

If you prefer your exercise outdoors, two ice skating rinks popped up in town for the holidays. The W Hotel Westwood 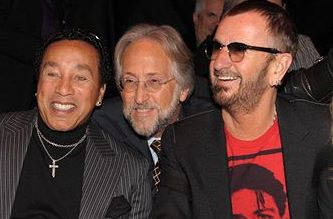 unveiled a winter wonderland in its backyard, while L.A.’s only professional skaters, the Kings, lit up “Holiday Ice” outside Staples with a performance by LeAnn Rimes on Thursday. Blinded on the 110 when whizzing by? Could be the 340,000-plus individual Christmas lights at the L.A. Live complex.

Inside, the Recording Academy kicked off its awards cycle with the Grammy nominations concert on Wednesday. NARAS president Neil Portnow popped in between Smokey Robinson and Ringo Starr at the televised concert/party from Club Nokia (right). LL Cool J hosted, while Beyonce and Taylor Swift cleaned up on the nominations.