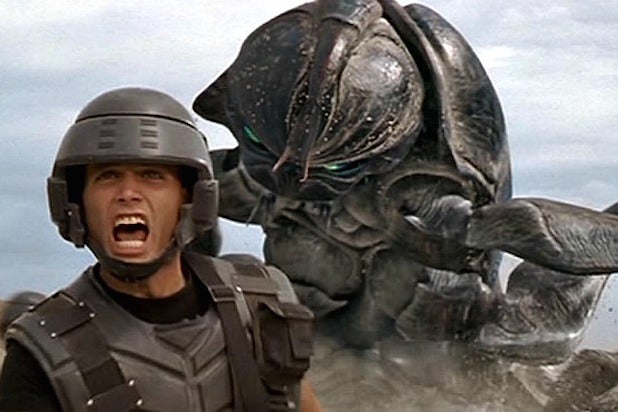 A “Starship Troopers” remake is in the works at Sony’s Columbia Pictures, and fans of the original Paul Verhoeven film aren’t quite as pumped as maybe studio executives were hoping.

“A non-satirical STARSHIP TROOPERS reboot is about the worst goddamn idea I’ve ever heard,” another tweeted out. “Thanks, 2016.”

Also Read: All New 'Starship Troopers' in the Works at Sony

The project is not a remake or a reboot of Verhoeven’s 1997 sci-fi movie, studio insiders told told TheWrap. Instead, the filmmakers are going back to the source material — a novel by Robert Heinlein. Nobody who worked on the 1997 film will be involved in the new project.

Mark Swift and Damian Shannon, who wrote the upcoming “Baywatch” comedy starring Zach Efron and Dwayne Johnson, will pen the screenplay. “Fast & Furious” producer Neal H. Moritz is producing along with Toby Jaffe (both worked on the original “Total Recall”).

The film is based on Heinlein’s 1959 sci-fi book about a futuristic Alien-fighting military force and soldier Johnny Rico.

Also Read: Why Is Typo Hashtag #HillaryForPrision Trending on Twitter?

Either way, here are some choice fan objections:

A non-satirical STARSHIP TROOPERS reboot is about the worst goddamn idea I've ever heard. Thanks, 2016.

Sorry, people… I cannot be bothered to comment on a Starship Troopers remake on the same day a f*cking Furby movie was announced.

Is there any doubt a STARSHIP TROOPERS reboot will be the very thing Verhoeven was satirizing? Or will the screenwriters of BAYWATCH wow me?

STARSHIP TROOPERS reboot will be based on the book and likely not a satire this time, so probably not very good then.

Absolutely devastated to hear the news that Starship Troopers is going to be remade.

soooo a #STARSHIPTROOPERS remake. gottdammit , you cant just remake a Verhoeven film. yea i know its a book , lol . but still