The State Department’s official website on Monday falsely reported that Donald Trump and Mike Pence’s term ended on Monday — and the agency blamed a disgruntled staffer for the hack, according to a report from BuzzFeed News’ Christopher Miller and political reporter Hugo Lowell.

The State Department did not immediately return further requests for comment and the individual who altered the web page has not yet been identified.

Twitter lit up Monday when users noticed the biography page for Trump on the state.gov website — which is now inaccessible — said simply, “Donald J. Trump’s term ended on 2021-01-11 19:40:41.” Within hours, the web page delivered a 404 error. 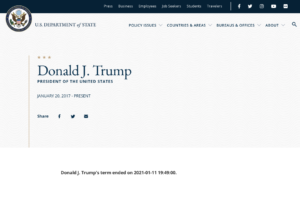 Users wondered if Vice President Mike Pence had invoked the 25th Amendment to remove Trump from office, as House Democrats and other leaders have been urging him to do since Wednesday’s riot at the Capitol. Pence’s page, however, was also altered to say his term had ended Monday. It is now also unavailable.

Numerous political commentators and journalists dubbed the entire situation “weird,” even before news broke that it was being blamed on a disgruntled staffer.

House Democrats on Monday urged Pence to invoke the 25th Amendment, but also introduced an article of impeachment against Trump, accusing him of “incitement of an insurrection.”

Supporters of Trump and his quest to overturn the 2020 election rallied Wednesday as the House and Senate prepared to certify President-elect Joe Biden’s win. Trump urged them to “show strength” and direct their attention to the Capitol. Some then breached the building, sending lawmakers into lockdown and delaying the certification. Four attendees died, as did a Capitol police officer responding to the riot. Over the weekend, a second officer who was on duty that day killed himself, bringing the total of associated deaths to six.