The United States Department of State has vowed to get U.S.-backed journalists out of Afghanistan safely. Over 100 journalists employed by the U.S. Agency for Global Media are stranded in the country, according to reports. American forces left Afghanistan this week.

Fox News obtained a statement from the State Department that said, “”We did not forget about USAGM employees and their families, nor will we. These employees have served the United States…..We remain keenly focused on getting them out, safely.”

USAGM includes outlets like Voice of America and Radio Free Europe/Radio Liberty. Voice of America has been covering the ongoing issue, reporting on Tuesday that GOP Rep. Michael McCaul called the situation “disgraceful.” 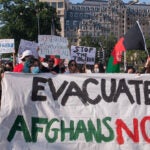 Also Read:
900-Plus Call on US Government to Protect Afghan Artists

“It is absolutely disgraceful the U.S. State Department claimed they evacuated their local employees when in reality they abandoned hundreds of USAGM journalists and their families,” he said.

RFE/FL president Jamie Fly also told the Washington Post that USAGM employees were previously told by the State Department that they would be evacuated with government employees, but they were ultimately left behind.

“You would have expected that the United States government, which helped create the space for journalism and civil society in Afghanistan over the last 20 years, would have tried to do more over the last several weeks to assist journalists who made a decision that it was best for them to leave the country,” Fly said.