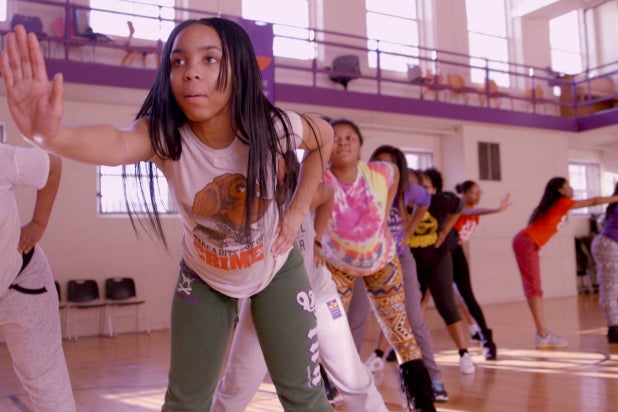 “Step” looks like a dance film, but it’s really a rollercoaster ride about expectations, drive, and achievement. The weight in each rhythmic stomp produced by the young women featured in this movie isn’t just to produce a sound in glorious sync, but to signal a togetherness in an often-brutal world.

Amanda Lipitz’s inspiring, Sundance award-winning documentary follows three African American teenage girls in Baltimore as they wend their way through a senior year in which they’re not just contenders for a statewide step dance crown, but also the first graduating class at an all-girls charter school designed with the express purpose of sending its students to college.

The competition in “Step” isn’t just to hit a stage and win a talent prize, but to beat the odds in life. Start figuring out now how to clap and dab away tears at the same time; it’s that kind of experience.

At the Baltimore Leadership School for Young Women, founded in 2008, step is an elective, but its cultural roots in black history — as an exuberant form of expression — make it feel as necessary a part of the students’ academic day as any other subject. It goes without saying that with the killing of Freddie Gray hanging over the city like a poisonous gas (Lipitz filmed at the school the year after Gray’s death), the determination behind every scene in “Step” is clear: these girls’ anxieties, dreams, hardships, and eventually their Gray-inspired, politically-minded competition routine define Black Lives Matter as effectively as any manifesto or protest speech. That the movie is also exhilarating to boot, from the personalities to the dances and eventually the graduation, only helps.

Step team captain Blessin, a vivacious charmer with attendance issues, gives “Step” much of its spark — keeping up with her hairstyle changes makes for its own colorful subplot — if also its nerviest moments: she’s the student whose graduation/college opportunities seem iffiest. Step is a passion for her — as a sixth grader she founded the team after discovering the dance form online and convincing her fledgling school to start a program — but with a mother and little brother who need help, getting across the finish line with grades, a diploma and a university prospect gets increasingly harder.

Cori is a bright, bookish student, a self-proclaimed introvert who is nevertheless hungry for the Lethal Ladies of BLSYW to win first prize. Her problem is one of little means and lots of ambition: she has the grades to get into a top-drawer university, but with family money issues that have occasionally left her large, extended family without electricity, she needs a full scholarship. For her, the prospect of incurring debt to attend college is anathema: she calls loans “the l word.”

Tayla, who jokingly calls herself “a notch down from Beyoncé,” has the most involved mother of the movie’s trio. Single mom Maisha is frequently seen dancing along at practices to motivate the team, and commiserating with the girls’ hard-driving coach Gari, an example of parental engagement all the more remarkable considering Maisha’s job is corrections officer on a night shift. Tayla may consider her mother’s energy tiresome, but first-time director Lipitz finds the right mix of embarrassment humor and poignant dedication in their special relationship.

Lipitz’s camera is immediate without ever feeling like a force for disturbance or an opportunistic hanger-on. She’s not a neutral observer (a Broadway producer, Lipitz also was involved in founding the school) but she recognizes how capturing the vitality of the girls creates a natural emotional pull without having to manufacture positivity. “Step” is particularly resonant when showing the toll the school’s mission takes on its devoted, terrier-like guidance counselor Paula Dofat, who cares about the girls’ well-being with the doggedness of a detective looking for the one clue that will solve a student’s problems and get her to recognize the future is hers.

If there’s one nit to pick here, it’s that when “Step” suits up for performance at the state competition, Lipitz, cinematographer Casey Regan and editor Penelope Falk occasionally fall into the vogueish style of over-spliced, multi-angled dance sequences that give short shrift to a wide-shot appreciation of the choreography. But otherwise, their artier impulses work, including an early setting-the-tone montage scored to Fifth Harmony’s “Worth It” that’s the perfect adrenaline shot of a statement of intent. After that, where “Step” leads, you’ll follow.

Watch All the Emmy Nominated-Dance Routines Since 2012 (Video)