MSNBC’s Stephanie Ruhle did not let West Virginia governor Jim Justice off easily while discussing a transgender athlete bill he recently signed. Justice ultimately admitted the bill was not “a priority” for him and he has not heard of any instance in which a transgender student-athlete had an advantage over teammates or competitors because they played on a team that corresponded to their gender identity.

“Sir, can you give me one example of a transgender child trying to get an unfair advantage? Just one in your state. You signed a bill about it,” asked Ruhle, referring to House Bill 3293, which states transgender athletes can’t be members of female school-sponsored sports clubs at any level of schooling in West Virginia.

Justice, who signed HB 3293 on Wednesday, replied, “I can’t really tell you one but I can tell you this, Stephanie: I’m a coach and I coach a girls’ basketball team and I can tell you, we all know — we all know what an absolute advantage boys would have playing against girls. We don’t need that.” 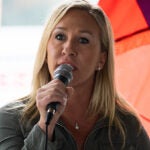 The two went back and forth as Ruhle pointed to other issues in the state that might demand more attention than a small number of transgender athletes trying to compete in school sports, like West Virginia’s sagging healthcare and education rankings. Eventually, Justice admitted, “I didn’t make it a priority. It wasn’t my bill.”

“I think we only have 12 kids, maybe, in our state that are transgender-type kids. I mean, for crying out loud, Stephanie. I sign hundreds of bills — hundreds of bills. This is not a priority to me,” the Republican lawmaker said.

“Alright then, Sir. Thank you and please come back when — beyond anecdotal feelings as a coach — you can show me evidence where those young women are being disadvantaged in your state,” Ruhle said.

Watch below, via MSNBC.