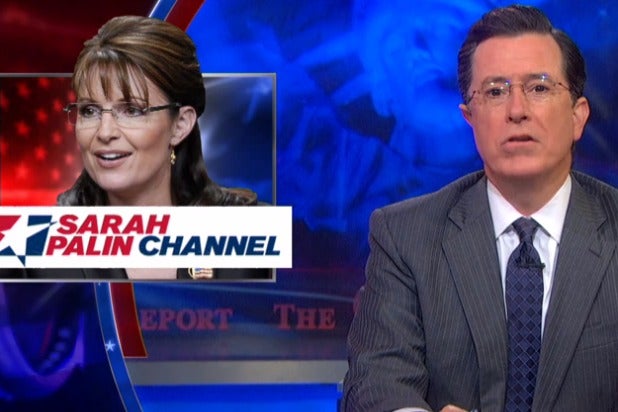 No offense to Sarah Palin, but Stephen Colbert thinks he can do The Sarah Palin Channel better than she can.

The “Colbert Report” host, a self-declared “huge fan” of Palin, took note Tuesday of her brand-new SarahPalinChannel.com, a site that will let Palin share her thoughts with no “lamesteam media” filters.

Colbert was so impressed that he bought a similarly named site: TheSarahPalinChannel.com. Colbert’s site boasts that it is “the only Sarah Palin Channel on the internet with a definite article in the address!”

Colbert also explained the appeal of the original Sarah Palin Channel — the one run by Palin.

“This is all part of Sarah’s continuing mission to protect our freedoms at any cost — specifically, $9.95 a month,” Colbert said. “Sure, that’s more than Netflix, but it’s just as good as ‘House of Cards’ with even more threatening monologues into camera.”

Colbert also notes that the site is a place where Palin fans can freely discuss issues and ask questions. One of the most popular: “What is your cancellation policy?”

“Palin fans want to be just like her, and quit halfway through our commitment,” he said.