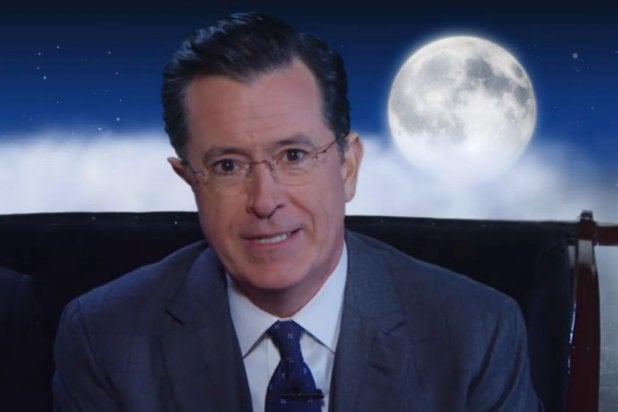 With “The Colbert Report” coming to a close on Thursday night after nine years on the air, some of the biggest names in Hollywood have been sharing their fond memories of the Comedy Central series.

Host Stephen Colbert brought back a slew of former guests for his final show in an epic, star-studded singalong. Those who weren’t able to make it (and even some who did) took to Twitter, Instagram and Facebook to post their messages of congratulations, appreciation and sadness to see Colbert and his conservative character go.

Comedy icon Steve Martin, former President Bill Clinton and Colbert’s replacement Larry Wilmore all offered the CBS-bound star their heartfelt notes. Others like James Franco and Andy Cohen shared photos from the set of the finale.

TheWrap has assembled all of the responses to Colbert’s final show. Find all of the great goodbyes below.

After nine years, the best source of "truthiness" is coming to an end. Congratulations @StephenAtHome. pic.twitter.com/JXAj5ATaxz

Congratulations to @StephenAtHome, one of the most talented people I've ever been around. I love the Colbert Report and will miss it.

Thank you Stephen Colbert. You are, and will continue to be a national treasure.

Bravo @StephenAtHome! I'm in awe of your talent, humbled by your legacy and moved by your generosity! Go kill it at CBS! #irreplaceable

The Colbert Finale was a paradise for someone (me) who loves random gatherings (and selfies): Franco,… http://t.co/H62XbGnY3q

So cool to be invited 2 b on Colbert Report finale. Can't wait 4 May when he takes over for Letterman. Thx Stephen pic.twitter.com/UTsy2lsMY6

Bravo to you @StephenAtHome. A gentleman & gigantic talent. Thank you for being who you are. The real deal. http://t.co/KWM7y89sZs

I'm endlessly floored and inspired by Colbert. What an amazing run.

Mr. @StephenAtHome, I am honored to have followed you this last year. CONGRATULATIONS on an epic run at CC! I adore you, you mad genius.

Thank you 9 years @StephenAtHome! A reverse baker's dozen of years!

Who else but @StephenAtHome could have brought everyone from Henry Kissinger to Big Bird together for a final song? pic.twitter.com/587QO2QYQp

I changed the world!