“The Late Show With Stephen Colbert” will return to the The Ed Sullivan Theater on June 14 with a full, vaccinated audience, the CBS late-night show revealed Monday. This makes the “Late Show” the first network late-night show to not just make the move back to its home studio, but also with a complete crowd.

Per CBS, “After more than a year and 205 episodes produced without a live audience, ‘The Late Show’ is looking forward to safely welcoming fans back to The Ed Sullivan, which features the largest studio audience of any late night or sketch comedy series.”

This news comes after Colbert had his first in-person “Late Show” guest at the studio in more than a year, John Krasinski, join him last week. 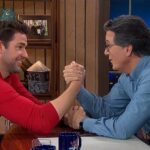 “The plan to return to the theater is consistent with New York State’s adoption of the CDC guidelines for fully vaccinated individuals and has been reviewed by the State,” CBS said. “Guests will be required to show proof of being fully vaccinated prior to entering. Face masks will be optional. All staff and crew members will continue to be tested prior to commencing work on a regular basis, as well as screened daily for symptoms. In addition, a COVID-19 compliance officer will be on staff to monitor and enforce all health and safety COVID-19 protocols.”

“The Late Show” was the first to return to the air during the pandemic, albeit in a very new format, with Colbert producing episodes remotely as “A Late Show” since March 16, 2020. Over the past year, remote production has moved from South Carolina and back to the offices of The Ed Sullivan Theater building, with 205 episodes produced remotely since leaving the theater, 16 of them live.

Information about in-studio guests for the week of June 14 will be announced at a later date.