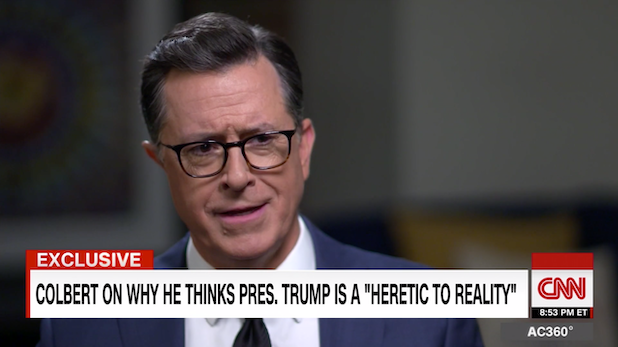 In an hour-long interview with CNN’s Anderson Cooper, Stephen Colbert didn’t shy away from expressing his views about the presidency, his regret over inviting Trump onto “The Late Show,” as well as grief, religion and other existential matters.

The interview, which aired on Thursday evening, was at turns funny, conversational, and at the end tearfully emotional as Cooper and Colbert talked about their similar losses — Colbert’s father and brothers died when he was 10; Cooper’s father also died when he was 10. Read on for highlights from the chat.

Colbert on Having Trump Back on “The Late Show”:

Also Read: Colbert Checks in on Trump After the Democratic Debates (Video)

Colbert joins fellow hosts David Letterman and Jimmy Fallon, both of whom have also expressed regret over inviting Trump onto their shows and putting him in front of millions of viewers.

In his Thursday interview with Cooper, Colbert also explained his description of Trump as a “heretic to reality,” in reference to the sin of heresy under the Catholic Church. (Colbert used the phrase last year in a Rolling Stone interview, describing the president as a “heretic against reality.”)

“Our president wants to live in a fantasy world where only the way he perceives the world is the way it is, and only things that  sort of serve his vision, and he’s also trying to convince us that that is the only world that exists,” Colbert told Cooper. “That’s heresy against reality. That is proselytizing for the most selfish and the basest instincts that the American people, like all people, have. But he is not appealing to the better angels of our nature.”

Colbert on Whether or Not Trump Is a White Nationalist:

“He called himself a nationalist,” Colbert said, adding that Trump has said he wants more immigrants from Norway, and less from Africa. “I think it’s a fairly simple equation to say that is a white nationalist,” he told Cooper.

Colbert on Whether He Talks About Trump Too Much:

Colbert on What He Learned Dealing With His Father’s Death:

“It’s a gift to exist. With existence comes suffering.”