Stephen Colbert looked back on Jan. 6, 2021 on Thursday night’s “Late Show,” sharing the story of how his program pivoted in the wake of the insurrection at the Capitol.

Colbert was working from home at the time, and on a Zoom meeting, when various staffers started sending messages about the chaos on Capitol Hill.

While still on their Zoom, the meeting attendees turned on TV, and one of Colbert’s coworkers screenshotted his reaction when he first saw footage of what was happening at the Capitol. Sharing the picture of his shocked expression, he explained to Thursday’s audience, “that is the face of a man whose dry January is about to get very wet.” 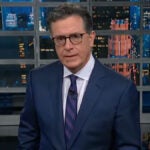 It was then that Colbert and his team “tore up the script.”

“I drove into the city while we all figured out what the hell was going on, and by the time I got here, my producer Chris… asked, should we be live tonight? And I was so overwhelmed, I said, you know what? I’m going to go to the bathroom, get my bearings, and when I come out, why don’t you tell me what we’re doing. And when I came out, [he] said, ‘Hey, we’re doing a live show tonight.’ And I said, ‘That sounds like a great idea,’” Colbert recounted.

Of course, as they worked to get a show prepared, the producer told the host that “every” advertiser had “pulled out,” so Colbert was told he would be live, with the camera on him for the full hour. 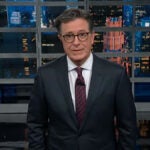 Also Read:
Colbert on Florida’s Rising Coronavirus Numbers: ‘In Florida, Even the Meth Has COVID’ (Video)

“But at the last minute we got new sponsors, so I’d like to salute the true heroes of Jan. 6, 2021 – CBS ad sales,” he said before humming the McDonald’s theme tune.