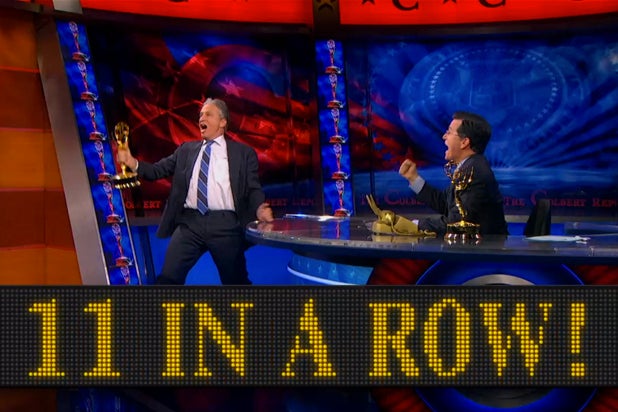 Stephen Colbert returned to his Emmy award-winning variety show stomping grounds on Tuesday, opening “The Colbert Report” by showing off the pair of Emmys he took home on Sunday night. He even made them kiss each other, because he can, because they are his Emmys.

Colbert was especially pleased to lord his victory over one vanquished rival in particular: The Daily Show, which had won the Outstanding Variety Emmy 10 years in a row before Sunday night.

First, Colbert apologized for his “verbal gaffe” in during his acceptance speech — when he thanked “everyone who works on this show to make it possible.”

“Boing! Womp womp,” Colbert said. “I don’t know what I was thinking. Cause I am the only one who does this show.”

“I am the one who achieved this!” he said, gesturing at his Emmys. “Without the help of any of these incredibly talented and attractive people!”

He then showed a clip of his staff of incredibly talented and attractive people cheering, which included the band Metallica hanging out in the front row.

Colbert then took a few minutes to call out Jon Stewart, whose “10 year reign of terror” as the winner of the Emmy for Outstanding Variety Show he put to an end with his win. He pulled out his special Emmy phone to call Stewart about it, but Stewart showed up in person.

“In your face!” Colbert cried.

But his celebration was short-lived, as Stewart said he was genuinely happy for Colbert’s win.

And then he reminded everyone that, as an executive producer on Colbert’s show, he won the Emmy, too. His 10-year winning steak is now an 11-year streak.