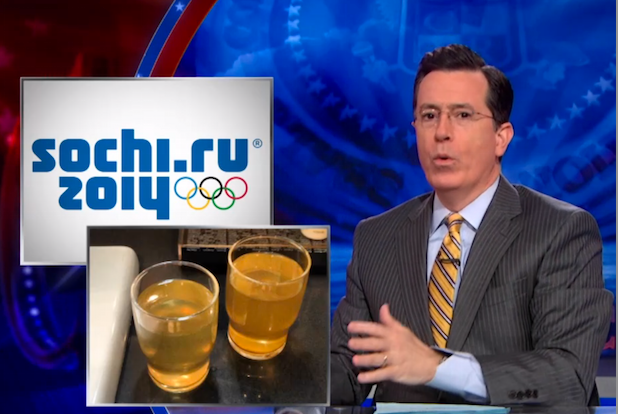 The Winter Olympics in Sochi are off to a rocky start, with media coverage of the games emphasizing unfinished hotels, unpaved streets and a wild dog problem.

It’s just spoiled journalists complaining, Stephen Colbert said on Monday’s “The Colbert Report.” There’s even a bright side to the lack of bathroom door handles, shoddy plumbing and construction headaches.

“On the plus side this year’s biathlon combines cross country skiing with hanging drywall,” Colbert joked.

Colorful accommodations aren’t the only thing generating ink. Reporters are also focused on an extremist terror group, the gays.That’s because Russia’s anti-gay laws are drawing the ire of protestors, who have rallied in 20 cities in opposition to Russian President Vladimir Putin’s support for measures that criminalize gay rights rallies and other activities.

“The gays aren’t taking this lying down, or maybe they are, I don’t know, it’s not my scene.,” Colbert noted

Also read: Stephen Colbert on Coke Ad: ‘Since When Are Gays Allowed to Gay Up’ a Song Written by a Lesbian? (Video)

“A finger in the eye or as lesbians call it — scissoring,” Colbert said.