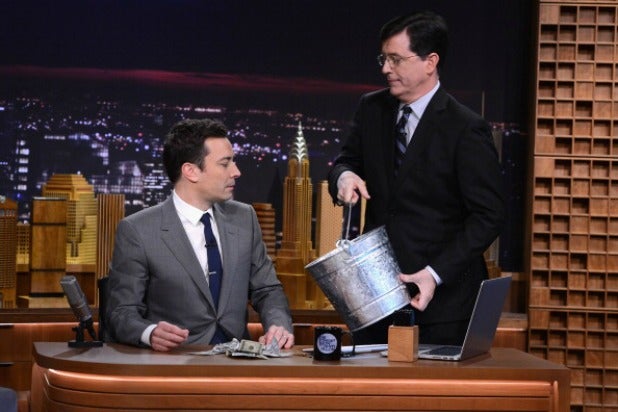 The biggest laugh on Jimmy Fallon’s “Tonight Show” debut may have been for Fallon’s late-night rival, Stephen Colbert.

Colbert stole the show during a skit in which a series of stars — from Robert DeNiro to Tina Fey to Mariah Carey to Lindsay Lohan — handed Fallon hundred-dollar bills, ostensibly to pay off a bet.

The joke started with Fallon saying a friend had bet him $100 he would never host “Tonight.” Out walked a grumpy De Niro — apparently the friend — to pay off the debt.

But it turned out Fallon had made the same bet with lots of other people, too, all of whom dropped $100 bills on his desk. They were, in order: Fey, Joe Namath, Rudy Guiliani (who thanked Fallon for bringing the show home), Carey, Tracy Morgan, Joan Rivers, Kim Kardashian (who also appeared on Jay Leno’s last “Tonight Show”), Seth Rogen, Lindsay Lohan, Sarah Jessica Parker, Mike Tyson, and Lady Gaga.

Colbert, whose “Colbert Report” airs opposite “Tonight,” was last. He brought out the $100 in pennies, dumping them on Fallon’s desk and Fallon himself.