I already used up all of my Genius Bar and Zune references when reviewing “Jobs,” the deeply flawed 2013 biopic of Steve Jobs in which Ashton Kutcher huffed and puffed but couldn’t really bring the controversial Apple Computers kingpin to life. Two years later, “Steve Jobs” comes to the screen upgraded with a stronger lead actor, better script and sharper direction, but it too leaves us feeling like we’ve seen an incomplete portrait of a complicated man.

Screenwriter Aaron Sorkin (“The Social Network”) eschews the standard this-happened-then-that-happened structure that “Jobs” and countless other movies use to tell a life story, but as Jobs himself demonstrated, trying something new isn’t necessarily the same as succeeding.

The result is a movie that feels like a series of beautifully and meticulously crafted tiles in a half-finished mosaic; you can admire the pieces but still come away feeling like you’ve been deprived of the whole.

Adapting Walter Isaacson‘s best-selling biography of the same title, Sorkin and director Danny Boyle choose three significant moments in Jobs’ career as a prism through which to view his entire life and the key relationships in it: the 1984 launch of the Macintosh, the 1988 presentation of the ill-fated NeXT cube, and the 1998 unveiling of the colorful iMac (a brightly-colored computer which one character disparagingly refers to as “Judy Jetson’s Easy-Bake oven”).

As we see Jobs (played intensely by Michael Fassbender) prepare for these big public moments, we get to know the people around him who love and/or hate him. Mostly the latter. By his side is his devoted aide-de-camp Joanna Hoffman (Kate Winslet), who seems to be the one person Jobs respects and might actually listen to. Chrisanne Brennan (Katherine Waterston) often shows up with young Lisa, the daughter that Jobs never seems to completely acknowledge is his, although his stance on her softens over the course of the film. 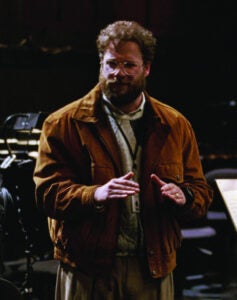 Then there’s Steve Wozniak (Seth Rogen), the jovial nerd who tries fruitlessly to make Jobs a people person and to get him to acknowledge the creators of other Apple products less near and dear to Jobs’ heart; engineer Andy Hertzfeld (Michael Stuhlbarg), who operates in terror that the 1984 event might hit some snags before coming into his own as the years go by; and John Sculley (Jeff Daniels), the former Pepsi exec whom Jobs brought into the Apple fold, which ultimately led to Sculley’s famous expelling of Jobs from the company before Jobs came back and returned the favor.

These product launches certainly bring with them substantial dramatic tension, given all the things that could go wrong at any given moment and the millions of dollars that always seem to be on the line. And of all those backstage areas certainly give Sorkin lots of hallways for the writer to toss out some of his trademark walk-and-talk scenes. But unless you’ve read Isaacson’s book (or, heck, even watched “Jobs”), there are many blanks that “Steve Jobs” refuses to fill in for you. Sorkin weaves in as much exposition as he can without overburdening the capable cast, but the three-launches structure never quite comes together in a way that assembles a complete picture.

If you come into the movie thinking of Jobs as a genius or a charlatan or a bastard or a visionary, you’ll find evidence to bolster your point of view, but not enough to change or complicate it. And if you aren’t particularly familiar with him at all, you may find it difficult to connect dots that the movie just assumes you already know.

Boyle and cinematographer Alwin H. Küchler, who previously collaborated on “Sunshine,” match each segment to the computers themselves: an earth-toned simplicity for the Macintosh, glistening blacks and shadows for the NeXT and a bright sheen for the iMac. The bridging material between the three main segments gives editor Elliot Graham (“Milk”) a moment to shine, but he keeps the proceedings taut throughout, reminding us that Jobs himself is under the gun and watching the clock, waiting for his moment to go onstage even though friends and enemies always seem to choose this time to engage in heavy conversation with him.

Fassbender has a challenging assignment here in that he has to bring the audience inside a person who remained maddeningly enigmatic even to the people closest to him. He evokes Jobs’ intelligence and cruelty in equal measures, and even if he keeps us from solving the riddle of this larger-than-life figure, he also keeps us watching.

In true Thelma Ritter style, Winslet makes what could have been a sidekick character into someone you’d like to see anchor a whole other movie. Joanna coddles and tolerates Steve’s eccentricities and obsessions, but she also knows when to put the hammer down. She and Fassbender can each hold the screen on their own, but they’re great at give-and-take, at listening and reacting to each other.

After three seasons of “The Newsroom,” Daniels knows how to make Sorkin’s dialogue-y dialogue sound spontaneous, but the real revelation here is Rogen: he’s played dramatic parts before, but hasn’t had that breakthrough moment that his friend Jonah Hill has experienced. Rogen going toe-to-toe with Fassbender, as two old friends and collaborators having their big let’s-get-it-all-out argument, provides “Steve Jobs” with its most electrifying moment and confirms that this clown can play Hamlet when he feels like it.

Played at ages 5, 9 and 19 by Makenzie Moss, Ripley Sobo and Perla Haney-Jardine, respectively, Lisa becomes the film’s conscience, or at least the litmus test for Jobs’ humanity. It’s a seamless performance that happens to be given by three actresses.

This is the sort of film that leaves me admiring what it wanted to do more than what it accomplished, and it’s one that merits a look for its impressive parts even though it falls short of a satisfying sum.