A version of this story first appeared in the Documentaries issue of TheWrap’s Oscar magazine.

The past is ravishingly alive in “Small Axe,” a five-film anthology directed by Steve McQueen (“Shame,” “12 Years a Slave,” “Widows”). Originally scheduled to premiere at the Cannes Film Festival (which was cancelled due to Covid-19), three of the films in the series eventually screened to raves at the virtual and drive-in New York Film Festival in September, prior to debuting on Amazon Prime.

Though not eligible for next April’s Academy Awards, the anthology has won awards from major critics’ organizations in New York, for Best Cinematography, and Los Angeles, for Best Picture(s).

Set between 1968 and the mid-’80s in London’s West Indian community, the movies include a real-life courtroom drama (“Mangrove”), a quasi-musical (“Lovers Rock”), and a police exposé (“Red, White and Blue”), all pulsating with McQueen’s primal themes of justice, injustice and love. The filmmaker spoke to TheWrap about his work on the monumental series.

TheWrap: Once you knew you were going to tell five narratives from this part of London, how did you decide which ones to tell?
Steve McQueen: I wanted to excavate and unearth stories. The story of the Mangrove Nine trial was always first in my mind, because that needed to be told. In the U.K. and obviously around the world, that story had been swept under the carpet. I only found out about Mangrove 10 or 15 years ago. These movies should have been made in the time periods where they take place. But they would not have gotten made.

Or if “Mangrove” did, you have to wonder if it would be told through the perspective of one of the white attorneys.
Well, “yes” is the answer to that question. So in deciding which stories to tell, in some way I was also trying to fix that narrative within British film, to be honest. I just know so many people who have lived and died — they were like the people from the Mangrove, but they lived and died without any kind of attention.

“Lovers Rock” is set over one night at a dance party in 1980. You’re capturing a mood in that film, which is so intoxicating, but did you also want to deliver a message?
In “Lovers Rock,” that party is a place of refuge, but it’s being circled by sharks and alligators. These Black folks are dealing with racist nonsense in their 9-to-5 jobs, and this party is a place where they can be themselves. So yeah, it’s a classic tale of people working for the weekend. And there’s a Cinderella theme. “Lovers Rock” is about my Aunt Molly, who used to sneak out on Saturday nights.

Has Janet Kay, the singer of “Silly Games,” seen the film? That song is so beautifully showcased.
I hope she has. What was interesting is that the older guy in the party, that’s Dennis Bovell. He’s the guy who wrote “Silly Games” and arranged it. That old guy did it all. And he was an amazing producer. He produced punk bands. He produced music for The Slits as well. So, yeah, we got him in the dance.

Is that significant? Did it take getting to this point in your life for you to make these films?
Well, turning 50 was like having a superpower. My God. It was like a situation where, yeah, you’ve been there, you’ve done that. It was wonderful. It was like, okay, I know how to deal with things to some extent. And yes, I know I couldn’t have done this at any other time. The things which are very close to you, you need to go have a certain distance before you recognize them. Just because I was willing to confront it, because it was very scary to be honest. That gave me a lot of energy. I remember the first day of shooting on “Small Axe.” I didn’t sleep all night. Didn’t sleep a wink.

In “Red, White and Blue,” John Boyega is remarkable as the real-life cop Leroy Logan, who fought racism inside the Metropolitan Police. Can you talk about his performance?
The project influenced him and he influenced the project. John Boyega and Leroy Logan: Two men who are poster boys. John is literally the poster boy for “Star Wars.” Leroy was literally the poster boy for the Metropolitan Police to recruit minority police officers. And what happens is those same institutions disappoint them. They never reach their potential, for no reasons of their own. John gave a speech that was widely seen in Hyde Park at a Black Lives Matter march, and that was while we were working on the film. Life and art combined.

Leroy’s father tells him in the film, “Change is a slow-moving wheel.”
Yeah, and it is. I understand that, but I’m often not patient enough. I’m more of the opinion to burn it all down, metaphorically, and start again.

In “Red, White and Blue,” there’s a scene where Leroy confronts his colleagues on the police force, after they had neglected to assist him. The whole group just stares at him and says nothing.
Silence is violence. It’s as simple as that. What has to happen before people understand our lives are at stake? Listen, a lot of people have realized that they can no longer be bystanders. Because when you don’t care, the people who are not the greatest take over. I think we see that with the recent presidency in the U.S., which is coming to an end. But it’s taken a man to be killed in the most gruesome way with a policeman’s knee on his neck. It’s taken for millions of people around the world to be marching for justice. It’s taken for people to say, “There might be something in this racism thing.”

And yet the outgoing president did receive a lot of votes.
Precisely. There you go. It says we’re in a fight. If people hadn’t realized we are in a fight, well, now you know. But because of the damage done and all the passive reaction for years, we might have learned too late. I hope not.

Read more from the Documentaries issue of TheWrap Oscar magazine. 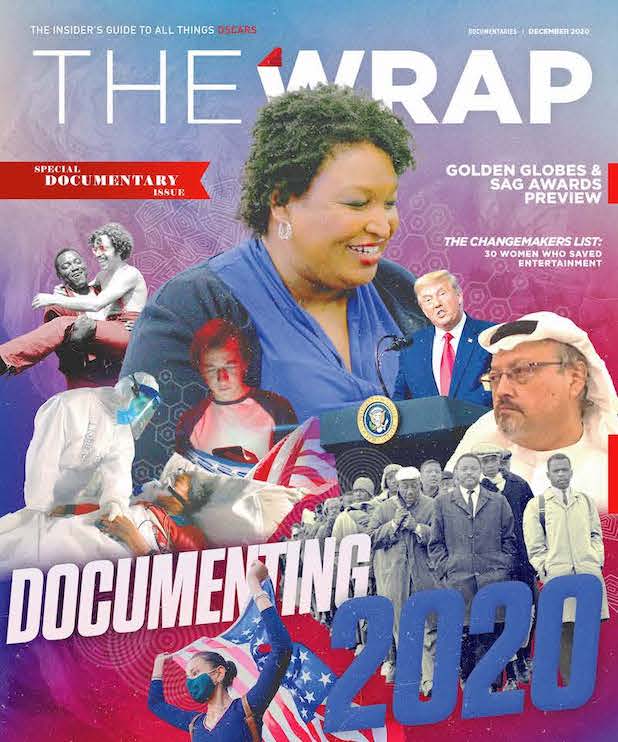