Steve Scully, longtime C-SPAN political editor and host, is leaving the network in early July, he announced on Tuesday. He will join the Bipartisan Policy Center as its senior vice president of communications after over three decades with the channel.

“For 30 years, C-SPAN has given me a front row seat to history, allowing me to explain politics and public policy to our loyal audience,” Scully said in a statement. “I am excited about my next chapter at the Bipartisan Policy Center to help shape that story as well. If ever there was a time where all sides need to reach across the aisle, it is now! I am honored the BPC will allow me to play a part in this important civic process.”

A representative for C-SPAN did not immediately return a request for comment. 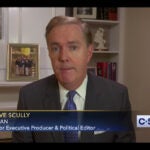 Scully is known for his longtime hosting duties on the network, but also for lying last year about being hacked on Twitter. He was suspended by C-SPAN at the time.

In a statement last October, Scully said he lied about tweeting a message to former White House communications director Anthony Scaramucci when he saw it had created “controversy.”

“For several weeks, I was subjected to relentless criticism on social media and in conservative news outlets regarding my role as moderator for the second presidential debate, including attacks aimed directly at my family,” Scully said in the statement. “Out of frustration, I sent a brief tweet addressed to Anthony Scaramucci. The next morning when I saw that this tweet had created a new controversy, I falsely claimed my Twitter account had been hacked. These were both errors in judgment for which I am totally responsible for. I apologize.”

C-SPAN said Scully admitted he lied to the network and the Commission on Presidential Debates, but the network said it would allow him to come back after some “distance from this episode.”