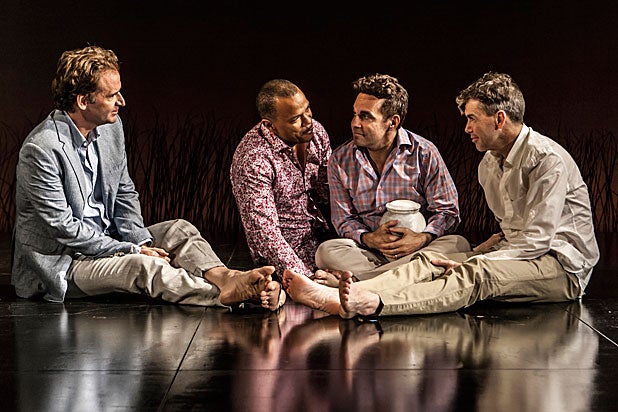 Right-wingers like Mike Huckabee think same-sex marriage is the end of civilization. Actually, it’s only the beginning of some very tedious playwriting.

For starters, Gerrard names three of his characters Steve, even though one of them (by far the most intriguing Steve) is never seen. He’s the trainer for a married couple named Matt (Mario Cantone) and Brian (Jerry Dixon), who have turned this third, unseen Steve into their live-in boyfriend. Gay polygamy, anyone?

I’d be interested in following that story. Gerrard, however, is not. He’s more interested in the other two Steves named Stephen (Malcolm Gets) and Steven (Matt McGrath), who are married and have a kid but haven’t had sex in a while because Stephen and Brian are constantly sexting each other, unbeknownst to Matt. Should Steven tell Matt what his husband is doing with his best friend’s husband? Is “The Edge of Night” still on TV and looking for stories?

Also Read: 'Lost Girls' Theater Review: Piper Perabo Is Mad as Hell at Men and Everybody Else

Stephen and Steven’s marriage doesn’t survive this bombshell, even though it is explained that sexting isn’t really sex. Or as Stephen tells Steven, “I didn’t, but you did.”

Steven admits that he did have sex with a waiter (Francisco Pryor Garat), replying, “I did. Once.”

Compare that exchange to any in “The Boys in the Band,” and you tell me which generation of gay men you’d rather spend an evening with.

Speaking of older playwrights, Gerrard does borrow from the Terrence McNally school of insult humor. Kristin Chenoweth, Audra McDonald and Kate Capshaw (really, Kate Capshaw?) are trashed in jokes that don’t land. At one point, a character asks in mock despair, “Did I scare him off with my one-boy version of the ‘Pacific Overtures’ cast album?” Somebody’s cat is named Elphaba and a shy person is nicknamed Blue Roses. Gerrard’s humor marches to the beat of a piano bar.

“Steve” makes a not-profound statement about communication in the age of iPhones and texting. In one scene, Stephen and Bruce text while an upstage screen gives us their responses to each other. Later, Stephen talks on the phone with his mother while texting Bruce, and again the screen lights up with their responses. Under Cynthia Nixon‘s direction, these extended moments of projected text don’t say a lot about communication in the modern age. They do rank as the two most dramatically inert scenes to be performed on a New York stage this season.

The acting suits the sitcom situations. Cantone does manage to deliver a wonderful moment when, without saying a word, he moves a drinking glass with his finger to let us know that Steven is full of crap on the subject of marital fidelity.

Back in the 1980s and ’90s, movies often cast a wisecracking gay character dying of AIDS to be the leading lady’s best friend. In “Steve,” since the stage is already filled with gay male characters, that sidekick role has been assigned to a wisecracking lesbian (Ashlie Atkinson) dying of cancer. She doesn’t make it to the final bathetic scene. Nowadays, lesbians have the best timing.