Steven Seagal is accused of hiring young women as personal attendants whose real job was to serve his strange and sometimes violent sexual desires, according to a civil lawsuit filed Monday in Los Angeles by a 23-year-old former model who describes her experience in harrowing detail.

The plaintiff, Kayden Nguyen, said she met the action star in February through an ad on Craigslist seeking an executive assistant and, after three interviews, was told to pack for a trip to New Orleans, where the A&E show "Steven Seagal Lawman" was taping. 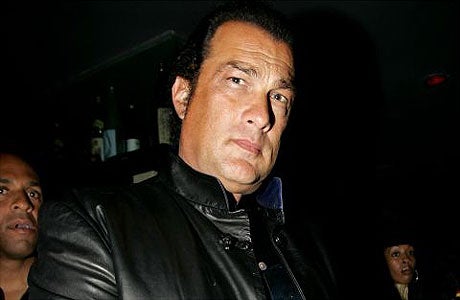 When she arrived, the lawsuit says, she discovered that Seagal had been keeping two young female Russian "attendants" who were essentially on-call for sex — 24-seven.

On that first night, Nguyen was ushered to a secluded house where Seagal was staying with his wife and the two young women. He then proceeded to treat Nguyen as his "sex toy" despite her complaints, the lawsuit says, responding to her terror as he fondled and manhandled her by saying "Relax, we won't do anything special tonight … I'll save that for another night.'"

She complained the following morning to some of the other employees, assuming that they would deliver the message to Seagal. Hours later, the lawsuit says he assaulted her again, this time forcing her to consume "illegal pills" and penetrating her vagina with his hand until she sobbed.

The following morning, when she confronted Seagal herself, he told her there had been a "misunderstanding"; but hours later, he assaulted her a third time, an attack that stopped only when she ran away.

The ordeal carried on for several days, and it wasn't until Feb. 28 — the following Sunday — that she was able to escape the situation.

The lawsuit says Nguyen told Seagal that she had to leave to meet with family members who would be suspicious if she didn't show up. Nonetheless, he told her not to leave the house and followed her with a gun equipped with a flashlight as she went out to a waiting cab, which sped away as she jumped in the front seat. 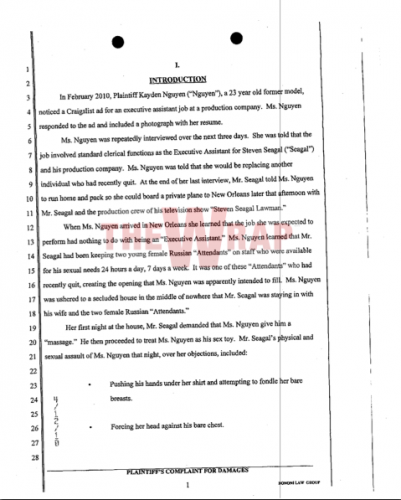 It was not clear why Kayden Nguyen chose to file a civil lawsuit instead of a criminal complaint. Messages left with her lawyers were not immediately returned Monday.

Nguyen's lawsuit claims that even after she got away, Seagal and his employees tried desperately to persuade her to return. When she escaped, she left behind "everything of value she owned," including car keys, her laptop, clothes, and "hundreds of dollars worth of makeup." She was told she would not get the items back until she signed an agreement stating she would not report the sexual attacks.

The lawsuit says Nguyen had accepted the job on Feb. 22, a Monday, and was sped in a limo to a waiting private jet. Her first indication that something was awry was when Seagal told her, as the plane was taking off, that his wife "wouldn't mind if we had a sexual relationship."

Nguyen's lawsuit said she could identify a "unique physiological reaction" that Seagal has to sexual arousal, which could be corroborated by the other "attendants." The suit did not specify what that reaction is.

The lawsuit alleges sexual harassment in violation of federal labor laws; illegal sex trafficking; retaliation; wrongful termination; and false representations about employment. Each of the six counts seeks in excess of $1 million in damages.