For the first time in his legendary directing career, Steven Spielberg has directed a music video, partnering with Marcus Mumford of Mumford and Sons fame to help him shoot the video for his latest single.

Mumford released his single “Cannibal,” the first song from his upcoming album “(self-titled)” last week, but on Monday he revealed via his Instagram the mastermind behind the simple video performed in a single, unbroken take. Turns out Spielberg himself filmed Mumford from a high school gym on July 3 and managed to shoot the whole video on his phone.

Spielberg also worked with partner Kate Capshaw as the video’s producer, art director and Dolly Grip, who in a photo Mumford shared can be seen dragging Spielberg backward in a rolling chair. And producer Kristie Macosko Krieger was also on site and shot some of the behind-the-scenes video footage. 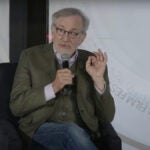 All three posed with Mumford and with his partner Carey Mulligan, who Mumford also credited with costumes and sound on the video.

“I’ve been overwhelmed by the support of the people around me to bring this music to you, and I cannot hope to express all of my gratitude. When people get it, it blows my mind,” Mumford wrote. “Kate and Steven just got it, and I cannot thank them enough. Thank you Kate. Thank you Kristie. Thank you Steven.”

Spielberg, at 75, is still finding ways to surprise us as a filmmaker. His “West Side Story” from last year was the first musical he ever directed in his long career, and his upcoming film “The Fabelmans” is a personal drama about his own childhood.

See Mumford’s behind-the-scenes post below, and check out the video Spielberg shot for “Cannibal” above. 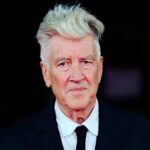 Also Read:
‘The Fabelmans': David Lynch Joins Cast of Steven Spielberg’s Film Based on His Childhood