Hollywood icon Steven Spielberg ignited a fierce debate this weekend over a plan to propose new rules for the Oscars that would place limits on Netflix and other streamers trying to get around a theatrical release, but still win Best Picture.

“Ultimately the Oscars are meant to promote the theatrical experience,” video director Joseph Kahn argued on Twitter, supporting Spielberg’s move.”Netflix releasing in one theater and claiming they should be celebrated the same way as ‘BlacKkKlansman’ or even yes, ‘Green Book,’ is not remotely fair.”

“Real talk, has Spielberg been to a normal people movie theater lately?” Fangoria editor-in-chief Phil Nobile, Jr. asked on Twitter. “Last month I had the absolute pleasure of watching a film I exec-produced play to a sold-out crowd at the Egyptian on Hollywood. So I get where Spielberg is coming from. But the next week I was just a regular person again. And the theaters I go to are trash fires.”

IndieWire reported on Thursday that Spielberg is expected to propose a rule change at next month’s Academy Board of Governors’ meeting to restrict eligibility for films that do not have a significant theatrical run, a reaction to the strong showing by the Netflix release of Alfonso Cuarón’s “Roma” at this year’s Oscars. In a statement sent to IndieWire, the Academy said that “awards rules discussions are ongoing with the branches. And the Board will likely consider the topic at the April meeting.”

Representatives for Spielberg and the Academy did not immediately respond to TheWrap’s requests for further comment.

The exact rules that Spielberg is planning to propose have not been disclosed, but one idea Academy insiders tell TheWrap may be on the table is to restrict eligibility to films that were exclusively in theaters for four to six weeks before being released on streaming.

That would prevent a film like “Roma,” which was on just over 100 screens for less than a month before hitting Netflix, from getting nominated. But getting support from the Academy for such a change would be difficult, as this would affect non-streaming indie studios as well, not to mention that the Academy already granted eligibility to films that open in theaters and streaming simultaneously back in 2012. 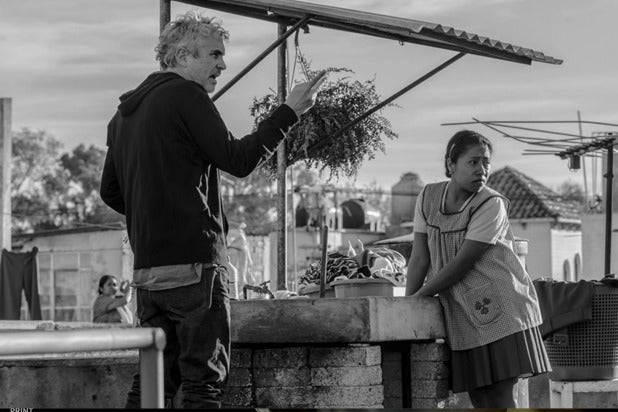 One Academy board member told TheWrap this weekend that they will oppose Spielberg’s proposals if they come forward. Outside the board, Ava DuVernay, a member of the Academy’s directors branch who has released films on Netflix, has also said she opposes such changes.

The Black List founder Franklin Leonard said such a rule change would disadvantage filmmakers of color: “I think we can all agree that the theatrical experience is worth protecting. I, for one, do,” Leonard tweeted. “I also think we can all agree that it is more difficult for films by and about women, people of color, and myriad other communities to access the resources necessary to secure an exclusive four week theatrical window.”

But Spielberg has insisted that such changes are necessary to protect the value of seeing a movie in theaters, something that he vowed to protect during a speech at the Cinema Audio Society Awards last month.

“I love television. I love the opportunity,” he said. “The sound is better in homes more than it ever has been in history but there’s nothing like going to a big dark theater with people you’ve never met before and having the experience wash over you. That’s something we all truly believe in.”

And some writers and filmmakers are publicly backing the director in his stand against streaming.

“Streaming is television. Quality television that has elevated the standards for made-for-TV and direct-to-video movies, but still television. Either do a theatrical release correctly or enjoy your Emmys,” tweeted writer David Cornelius. “All [Spielberg] is asking is for a slight window between theatrical availability and home video availability, to help underscore a film’s status as a big screen event.”

But not everyone feels like movie theaters provide that “big event” feel anymore. Repertory theaters like Hollywood’s Egyptian Theatre and the Quentin Tarantino-owned New Beverly Cinema go the extra mile to make going to the movies feel special. National chains like AMC and Cinemark have also made efforts in recent years to woo back moviegoers with upgraded food, alcohol availability and recliner seats. But despite these efforts, movie theaters still have a stigma of inconvenience and poor quality that is proving difficult to shake.

“At my home, I’ve invested in a home theater setup,” Tedone said on Twitter. “When it’s time to watch a film, no phones, no talking. We are watching the film. That’s it. The picture is calibrated, the sound is too. The picture in my room is better than most of the times I see something at the theater.”

But there’s also a debate over just how much the communal and large-format nature of the movie theater adds to movies as an art form. Spielberg sees it as absolutely essential, to the point that he has openly said he doesn’t think Netflix films should be eligible for Oscars at all.

“Once you commit to a television format, you’re a TV movie,” he told ITV News. “You certainly, if it’s a good show, deserve an Emmy, but not an Oscar. I don’t believe films that are just given token qualifications in a couple of theaters for less than a week should qualify for the Academy Award nomination.”

Films like “Roma,” which were not produced by Netflix and premiered at the prestigious Venice Film Festival, are blurring the line, especially as streamers take a bigger presence as buyers at Sundance and other festivals. On top of that, there’s another awards campaign practice that leads to many Academy members seeing Oscar contenders out of the theater: screeners.

“Here’s how we’ll know if Spielberg has the courage of his convictions: When he calls for abolishing screeners,” tweeted “The Daily Show” writer/producer Daniel Radosh. “After all, shouldn’t the people who actually vote for the Oscars be the ones required to see the films in their ideal form?”

The trend is actually going in the other direction. In an effort to encourage wider viewing of all nominees among voters and to consolidate the screening process, the Academy has encouraged its members in recent years to watch screeners through its member website. While studios and trade news outlets (like this one) still host FYC screenings during awards season, even the Academy is recognizing that streaming makes it easier for all the nominees to get in front of their entire membership.

“Roma” may have failed to become the first film released by a streamer to win Best Picture, but with three Oscars from 10 nominations, it has definitely forced the issue. Along with the battle to come at the Board of Governors meeting, April will also see movie theater owners convene at CinemaCon in Las Vegas, where the National Association of Theater Owners will certainly be faced with questions on how it will deal with Netflix’s steadfast refusal to disclose its box office numbers.

And Netflix won’t be stopping with its plans to deal out big films, as it will release Martin Scorsese’s “The Irishman” next fall. With an all-star cast led by Robert De Niro and a blockbuster budget to de-age the stars in flashback scenes, Netflix will almost assuredly be back in the Oscar conversation next year…provided that Spielberg’s crusade isn’t successful.