Steven Spielberg is developing a film based on one of Steve McQueen’s most iconic film roles, Frank Bullitt, according to an individual with knowledge of the project.

Josh Singer will write the screenplay. The film will not be a remake but a new story with the Bullitt character at the center.

McQueen originally starred as Frank Bullitt in the the 1968 classic “Bullitt,” which followed a cop who is on the hunt for a mob kingpin that killed a witness. The film has what is considered one of the best car chase scenes in cinematic history until “The French Connection” came along three years later in 1971. 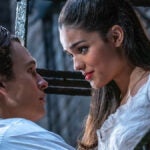 Next up for Spielberg is “The Fabelmens,” the film that’s loosely based on his childhood.

“The Fabelmans,” from Amblin Entertainment, will hit theaters wide on Nov. 23, 2022.