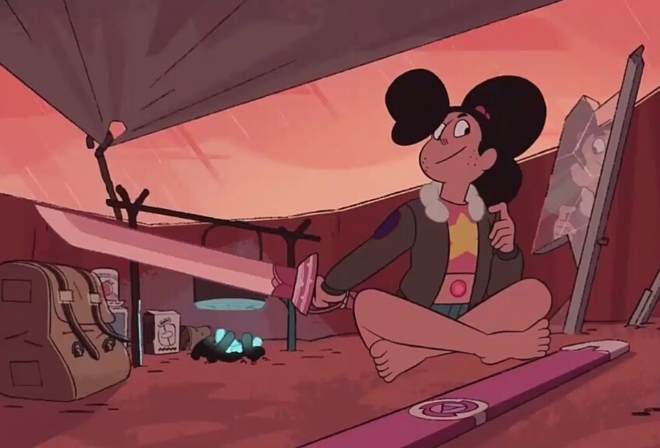 This story about “Steven Universe” first appeared in the Down to the Wire issue of TheWrap’s Emmy magazine.

It’s a single, three-second shot in a montage, but for fans of “Steven Universe,” it’s one of the most meaningful in the history of the Cartoon Network’s hit animated show.

In the episode “Jungle Moon,” which has earned creator Rebecca Sugar and her team their fourth Emmy nomination, the half-alien boy Steven inhabits the body of Stevonnie, a fusion of himself and his best friend, Connie.

Armed with the sword and shield once wielded by Steven’s mother, they are stuck on an alien planet light years from Earth. After building their shelter, Stevonnie takes the time to shave with the sword.

It’s one of many moments where “Steven Universe,” with quiet effortlessness, waves the flag for LGBT representation in children’s media. But Sugar doesn’t waste time explaining why many of her alien characters are women who are non-binary or queer.

“We had an earlier episode where Steven starts growing a beard, and as a fusion, it just made sense for Stevonnie to shave while on this big alien jungle adventure,” Sugar said. “And more than that, Stevonnie’s experience is like the everyday experience of a lot of people who are non-binary, and they can connect to that.”

But more than that, the kids who watch “Steven Universe” have connected to it en masse. At the recent San Diego Comic-Con, which took place just a few weeks after two of the show’s characters, Ruby and Sapphire, got married, Sugar said she met dozens of kids who were so happy to see the two gems together they never questioned their relationship.

In turn, the show has impacted how those kids make friendships at school, breaking through barriers that Sugar faced growing up.

“When I was young, certain kids didn’t want to play with other kids because everything is separated by gender,” she said. “Now, I get to meet kids for whom everything is so much more fluid, and it makes me so grateful that things are different.”